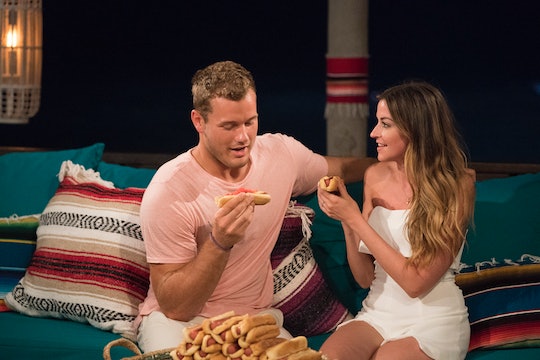 Ultimately, Colton realized that he was only committing to Tia in Paradise because he was trying to please her. He finally understood that it wasn't working for him, even though he admittedly came to Paradise for her, and wanted to go focus on figuring out what he really wanted and how to get it. Tia was surprisingly understanding, even though she broke down over it, and managed to show Colton some empathy, urging him to go home and work through his baggage before he landed himself in the exact same situation with yet another woman.

Colton's exit drive was basically a big pity party in which he acknowledged that Tia deserved better and called himself "broken." But in the end, he couldn't force himself to have feelings for her or to match her enthusiasm for the relationship. And it was heartbreaking to watch it all unfold. In a heart-to-heart with Kevin, Colton admitted that his heart wasn't in it with Tia and he could sense that he wasn't all the way in, especially when he looked at stronger couples like Kevin and Astrid.

"What kills me is I've done that my whole life, make other people happy. My whole life, that's all I've wanted to do is please people. And the only person I've burned is myself by staying in things. Even with football, I kept playing because that's what people knew me for. That's what my family wanted. Now I'm staying in this because it makes somebody else happy. That's not right. That's dragging it along. That's leading her on. I can't sit around on a beach anymore and look at her every day and know that there's not a future."

All the while, Tia was happily planning their engagement, wedding, and future children elsewhere on the beach, and gushing about how confident she felt in the relationship. Clearly, they were on very different pages.

Colton eventually pulled Tia aside and came clean, admitting that he'd been struggling the entire time in Paradise trying to make the relationship work. He claimed he wanted it so badly, but ultimately, his feelings just weren't there.

"Can you honestly say that you tried?" Tia pleaded.

"I can look at you with 100 percent honesty and tell you that I tried here," Colton replied. "I gave it my all."

She broke down as he finally confessed that he couldn't give her what he knew she deserved. They both decided that the best thing to do would be to go home, since neither of them were interested in dating anyone else for the rest of the season. In the end, they both left Paradise after their gut-wrenching breakup.