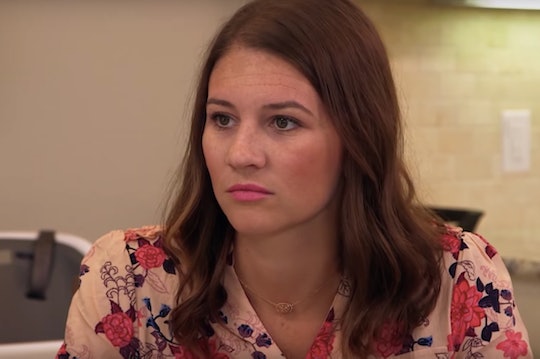 There's a lot we know about the Busbys. We know their daughters names, we know how potty training is going, we know about the time they had mold in their house, and pretty much every other detail in between. Such might be the life for a family of reality TV stars, but as it turns out, they had a much different life prior to being picked up by TLC. As you wonder about their backgrounds, you might be curious — did Danielle Busby go to college? Before she started Outdaughtered, she was working full-time.

Those who are already familiar with the Busby family story will recall that the couple actually met as co-workers, back when they were both employed by Target. In the years after they were first together and then married, the couple each took on multiple different jobs. According to TLC, Busby worked as an independent beauty consultant, and then in an interview with StyleBluePrint.com, Danielle explained that they both worked in petrochemicals in Texas, with Adam in communication and sales and her leading training. Together, they also opened an indoor cycling studio.

Danielle has never explicitly said whether or not she attended college, but it's possible the omission means she didn't. Though this certainly does not confirm or deny whether or not she went, she didn't have a job that required a degree which, while not definitive, makes that even more likely.

However, college or not, the Busby family is not struggling by any means today.

In fact, the couple brings in about $25K per episode of Outdaughtered, Heavy.com reported. When the show first started, Danielle told People that it was an adjustment, because after she got pregnant and had to go on maternity leave, they went from two incomes to one, and with 6 kids to feed that can be jarring.

Of course that was then. Now, the Busbys maintain a grounded and grateful approach to their finances. “We budget and we do what we can to make ends meet and make it work," she said in the People interview. "The biggest part of it all is that no matter what we come across, God has always provided, no matter what the situation. I feel like that’s kind of his working in this story that we’re living and sharing. He’s protecting and guiding us and providing… and that’s how we’ve done it!”

Despite the show's success, Adam hasn't stopped working. Distractify reported that according to his LinkedIn page, the Busby patriarch currently works as an Account Manager for a communications company in Texas where he has been employed for more than 12 years.

Today, Danielle is most busy taking care of her six daughters and, of course, keeping up with her other passions as well. She still trains and even documents some of it on her Instagram.

On top of all that, she and Adam are also committed to giving back to their community. Country Living reported that they partnered with the toy company Learning Resources to provide Hurricane Harvey victims with $75,000 worth of toys, which is no small sum.

All in all, it seems Danielle is thriving in work and in her home life. Whether she went to college or not seems to be a small, irrelevant detail in her awesome journey.