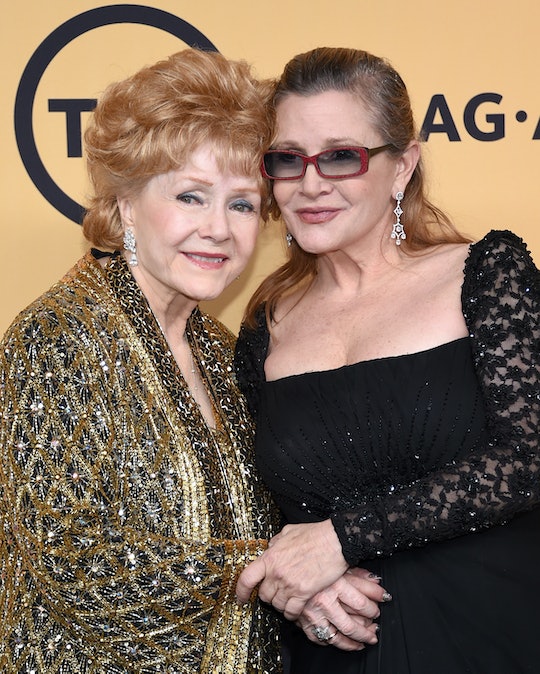 Did Debbie Reynolds Die Of Grief?

On Dec. 28, 2016, in one of the most tragic events of an undeniably tragic year, Hollywood legend Debbie Reynolds passed away from a stroke after being rushed to the hospital. She’d collapsed at her son’s house while making funeral plans for her daughter, Star Wars actor and writer Carrie Fisher, who had died the day before after suffering a heart attack.

Reynolds, who was 84 when she passed away, had a long and tumultuous life. She was thrice-divorced; her romantic relationships, including with Carrie’s dad, the late vocalist Eddie Fisher, had been notoriously unsatisfying. And though her relationship with her daughter was occasionally fraught, with the two refusing to talk to each other for at least a decade, it's clear that it was Reynolds' children who were perhaps the true loves her life.

"There have been a few times when I thought I was going to lose Carrie," Reynolds told Oprah Winfrey in 2011. "I’ve had to walk through a lot of my tears. but she’s worth it.”

Almost immediately, people on social media started speculating whether Reynolds had died of grief, due to the timing of her passing. And according to her son Todd Fisher, Reynolds’ last words were: “I want to be with Carrie.” But is dying of grief even possible?

While it might sound like the kind of thing that skeptics might write off as something straight out of a Hollywood tearjerker, there is some precedent in medical literature for passing away after an emotionally devastating or traumatic event.

A 2012 Notre Dame study found that a mother has a whopping 133% greater risk of dying in the first two years following the death of a child.

Whether or not it’s physiologically possible to pass away from grief itself, the American Heart Association recognizes the validity of broken heart syndrome, a surge of stress hormones triggered by emotional pain that primarily affects women. A 2012 Notre Dame study found that a mother has a whopping 133% greater risk of dying in the first two years following the death of a child. (Similar rates also exist for spouses.)

These statistics got me thinking about a similar experience my family had this year as well, when my grandmother and her son passed away within a month of each other. By mid-2016, my uncle had been suffering from throat cancer for almost 20 years, and his latest surgery had rendered him unable to talk or eat. The family prepared ourselves the best we could to say goodbye.

My grandmother was perfectly healthy, so we didn’t think we’d lose her first. But when doctors discovered a tumor in her mouth, we carefully explained her choices to her. She could undergo chemo, which would make her teeth fall out and might prolong her life expectancy for a few months, or she could undergo risky surgery to remove the tumor, which was certain to leave her unable to talk, chew or swallow.

“Nothing,” she replied. Her mind was made up, and we knew better than to argue. This was a woman with working-class roots who had raised beautiful, accomplished children, outlived her ex-POW husband by a decade, and then insisted on moving into the most desirable condo in town, where she could look over Lake Superior like the queen she was and wait for the day when she’d leave it. And now it was time.

Nana could have been there next to us, mourning her son, but she wasn't. I guess choosing not to be there for that moment was her last show of strength.

The next day, she bundled up into a wheelchair to wave to my cousin as she ran Grandma’s Marathon in Duluth, went back to her condo, opened the blinds so she could see the lake, and began to die. It took a week.

“That’s Nana. She was like, I’m outta here,” said my mother.

I scoffed at that. Nobody can choose to die, right? But it seems she did. What I still didn’t understand was why. Her condition wasn’t untreatable, and she could have had more time with her family. Why would she choose to check out now?

A month later, when my uncle inevitably passed away, I finally figured it out. I sat in the front pew of the church, next to my father, listening to a hymn I'd never bothered to pay attention to before. "Mother's there expecting me, father's waiting, too...," the choir sang. Nana could have been there next to us, mourning her son, but she wasn't. I guess choosing not to be there for that moment was her last show of strength.

Our family wasn't perfect. Like Reynolds and Fisher, Nana's relationship with her firstborn son was also strained in the early years. But no parent should ever have to outlive their child. Nor does it seem likely that someone can choose to have a stroke, although in Debbie Reynolds’ case, medical experts have speculated that shock and stress might have played a factor.

We don't know Debbie Reynolds, nor do we know the extent of her preexisting medical issues. And when it comes to a serious health issue like a stroke, we often don’t have a lot of good choices (or any choice at all, for that matter).

But it seems that like my grandmother, Reynolds did choose not to have to be in the front row of her daughter's memorial service. And that was her prerogative. Maybe, when Carrie’s siblings and her daughter Billie Lourd gather to memorialize their mother and grandmother, this will bring her some comfort. I hope it does.