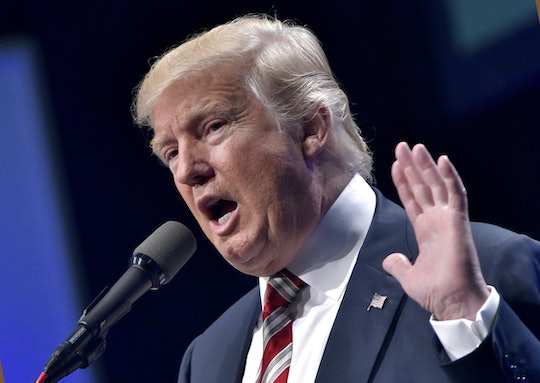 Did Donald Trump Grow Up Poor? Eric Trump Wants People To Think So

There is no denying that Republican Party nominee Donald Trump is a rich and powerful businessman — at least, according to Donald Trump — who has used these words to describe himself on the presidential campaign trail countless times. But even before Donald Trump started campaigning, people knew of his wealth and power — they saw it just by watching his reality show, The Apprentice or reading his 2004 book Trump: How To Get Rich. But did Donald Trump grow up poor — or has he always been used to having so much money?

In an interview with Fox News on Friday, Donald's second oldest son, Eric, told the network that his dad grew up poor. According to CNN, Eric insisted that Donald is an image of the American dream starting from little to nothing, and becoming a man who owns a gold plated sky scraper in Manhattan and skyscrapers all over the nation. "Well I think he has been a guy who has been an entrepreneurial guy," Eric told Fox News. "He's built an amazing company. He's become the epitome of the American dream. He's gone from just about nothing." But how valid are Eric's statements? It depends on your definition of "coming from nothing" — and it appears that Donald Trump has definitely come from something.

Donald Trump was born in Queens, a borough outside of New York City, to Mary and Fred Trump. According to the BBC, Fred was a real estate developer much like Donald is now. Fred's real estate business, which had an estimated worth of millions of dollars, built low income residential properties in Brooklyn and Queens. According to The Week, when Fred died he was worth an estimated $300 million. According to Alternet, Donald reportedly attended private schools as a kid and received a reportedly hefty inheritance. One look at Donald Trump's childhood home can also show that Donald didn't come from "nothing" nonetheless grow up poor.

When Donald Trump finally got his start in business after graduating from the University of Pennsylvania in 1968, Donald didn't necessarily start his real estate business from scratch. Donald had a little help from his dad — in the form of a "small loan" of $1 million, according to CNN. Due to inflation, $1 million in 1968 is now 6.8 million in 2015 — not so small now. But even if Donald did not grow up as rich as people assume and even if his dad did not connect him in the real estate community, Donald definitely had something — he had privilege. Donald had the Trump name, already recognized by developers in Queens and Brooklyn. And he had the money to get his start — something many real estate developers don't have immediately out of college.

There is no denying that Donald Trump has worked hard but its hard to argue that Trump started with "just about nothing."