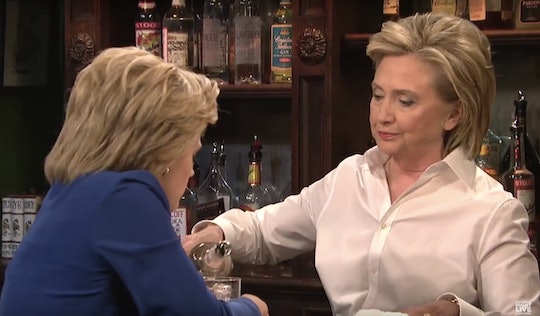 Did Donald Trump Or Hillary Clinton Do Better On 'SNL'? This One's Closer Than You Think

Following Donald Trump's SNL hosting gig and the Hillz' own stopover on the show last month, we're now faced with one obvious question: Did Trump or Clinton do better on SNL? Both Donald Trump and Hillary Clinton have popped up on Saturday Night Live dozens of times over the years, usually as characters played by the likes of Darrell Hammond and Kate McKinnon. But the times when Trump and Clinton have appeared as themselves, live from New York City, have been the most memorable.

To some extent, asking whether The Donald did better than Clinton on SNL is a little like evaluating Republicans and Democrats positions on, say, global warming or women’s rights — they just don’t compare. In this case, the big reason for that is Clinton hasn’t actually hosted the show while Trump’s now done it twice. But Clinton has appeared on SNL in person a number of times throughout the years, including her latest stop-by in October. So we still have some measures by which to compare Trump versus Clinton on SNL.

Trump automatically has the advantage. I mean, the guy doesn’t even have to be making an actual joke into order to be hilarious half of the time. This doesn’t mean he’s the better comedian, just that he’s basically a walking, talking meme. Case in point: When he stood alongside impersonators Taran Killam and Darrell Hammond and it was truly difficult to tell them apart.

Although Clinton is also capable of poking fun at herself, she is ever the self-aware politician. Take for example her cameo from October 3, in which she played a bartender named Val (“an ordinary citizen who believes the Keystone Pipeline will destroy our environment”) who was tasked with lifting Kate McKinnon-as-Hillary Clinton’s spirits. There were a few jabs at Clinton’s record, like when Clinton conceded it was a “good point” when McKinnon insisted she could have supported gay marriage sooner, but the real Clinton still came out looking good.

By comparison, Trump threw political correctness to the wind during tonight's SNL when he still went after nemesis Rosie O'Donnell. “I don’t hold grudges against anybody, like Rosie O’Donnell. She said some things about me that were hurtful and untrue. I said some things about here that were mean, but completely accurate,” Trump said during his opening monologue. Then he brought out O’Donnell to prove his point — only it was Aidy Bryant, as Aidy Bryant, trying to explain to Trump that she’s a different person.

Still, the very first skit with The Donald was basically a campaign commercial (one paid for by the Melania For First Lady Foundation), ending with Trump saying the idyllic version of America that had just been described as his staff would actually be even better if he's president. Maybe Trump and Clinton are more alike that we realized...

Here's the final score: As much as it really pains me to admit, Trump actually wins this contest — at least until Hillz does a full hosting gig. Which can't come soon enough, in my opinion.

More Like This
18 Instagram Captions For Pictures Of Your Kid's First Swim
Why Is My Vaginal Area Dark?
'Call The Midwife' Has A Fascinating True Story Behind It
'Everything Everywhere All At Once' Was Like Peering Into My Mother's Psyche