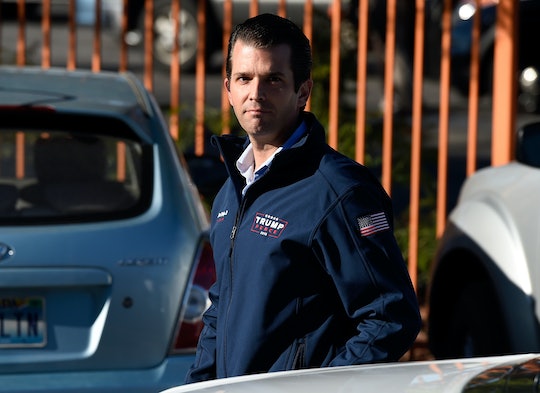 On Monday, The New York Times released a report that Donald Trump Jr. had plans to meet with a Russian lawyer last year who claimed she had incriminating information on former Democratic presidential candidate Hillary Clinton. Trump Jr. responded early to the impending backlash from Tuesday's article by sharing the related email communication on his Twitter account, just ahead of the story's publication, and suggesting that the meeting was insignificant. But legal experts are speculating that, actually, it could be a really big deal. Did Donald Trump Jr. commit treason?

While it's definitely possible his actions could have legal implications, treason may not be one of them. (A rep for Donald Trump Jr. did not immediately return Romper's request for comment.)

According to The New York Times, Donald Trump Jr. was first contacted about Clinton by entertainment publicist Rob Goldstone back in June 2016, when a former Russian business partner of the president told Goldstone that he had been contacted by a senior Russian government official who could provide documents that “would incriminate Hillary and her dealings with Russia" and that it "would be very useful to [Donald Trump]." In a written statement he posted on Twitter, Trump Jr. explained that he had then agreed to take a call with Russian lawyer Natalia Veselnitskaya, and when it didn't end up taking place, he agreed to meet with her in person in New York.

Although Donald Trump Jr. doesn't appear to be particularly shaken by the release of the emails, the information they provide does seem pretty damning. Primarily because the documents specifically indicate that the entire point of the meeting was to present information to Trump Jr. that would "incriminate Hillary," and because Goldman explicitly told Trump Jr. in his initial email that the "high-level and sensitive information ... is part of Russia and its government's support for Mr. Trump." The fact that Trump Jr. responded by asking to book a phone call with Veselnitskaya instead of reporting the claim to the authorities — and the fact that he ultimately met with her in person — suggests that he may have acted illegally. But even though that may seem like treason to some, it doesn't fit the legal definition.

On Tuesday, Virginia Sen. Tim Kaine (who also served as Clinton's running mate during the election), spoke out about Trump Jr's emails, and told CNN, "We are now beyond obstruction of justice. This is moving into perjury, false statements and even potentially treason." And Kaine wasn't the only one making that claim: according to The Hill, former White House ethics lawyer Richard Painter told MSNBC that as far as he was concerned, Trump Jr.'s behavior "borders on treason." But according to Vox, there's one specific reason why they're both wrong in their assessment, at least according to the Constitution: in order for Trump Jr. to have committed treason against the United States, the country would have had to be at war with Russia (and obviously it was not).

That doesn't necessarily mean Trump Jr. shouldn't be concerned though. That's because legal experts say that his action may in fact fit the criminal definition of conspiracy. Lawyer Jeffrey Jacobovitz, who formerly represented White House officials during the Clinton administration, told The Washington Post, for example, that the emails appear to illustrate that Trump Jr. "[conspired] with a foreign adversary to influence or undermine an election," especially because they seem to prove that he knew the intention was to gain possibly helpful information from the Russian government prior to agreeing to the meeting, and went ahead with it anyway.

Similarly, George Washington University law professor Randall D. Eliason argued in a piece for The Independent, that Trump Jr.'s decision to meet with Veselnitskaya appears to be conspiracy, regardless of what may or may not have happened at the meeting itself. He wrote,

This meeting provides critical evidence about the state of mind of Trump representatives: They were willing to hear what a Russian individual had to offer about their opponent.

The first line of defense against a conspiracy allegation typically would be: 'That's ridiculous — I'd never agree to meet with someone from Russia under those circumstances. That line of defense appears to be gone. Members of the Trump campaign didn't call the FBI to report a Russian national's offer to dish dirt about the former US Secretary of State — they took the meeting.

It's no surprise that many Americans are outraged following the release of the emails, and it's likely that this issue could have major implications moving ahead. But one thing it sounds like no one should expect? Charges of treason — for Trump Jr., or anyone else in the administration.