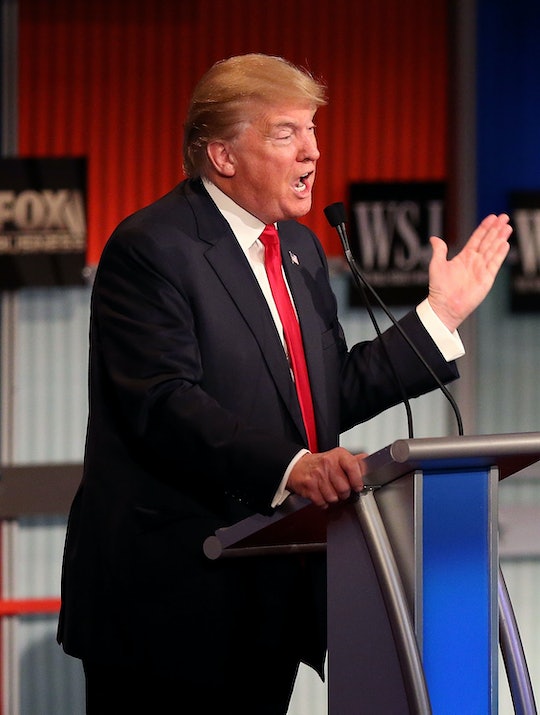 Did Donald Trump Meet Putin? The Candidate May Have Straight-Up Lied About Meeting On '60 Minutes,' & If So, That's Not OK

Donald Trump is always a performer — this much we all know. And tonight was no exception. During the fourth GOP debate, FOX Business went to a Facebook word cloud that showed a lot of viewers are worried about homeland security. In doing so, Trump was the first to take a question about Russia being a “top challenge.” But while discussing Russia,  Trump may have lied about meeting Vladimir Putin during a CBS 60 Minutes episode. He was referencing a Sept. 27 episode when Trump was interviewed about his candidacy and Putin was interviewed and discussed gay rights in Russia. The moderator asked Trump how he, as president, would deal with Putin in solving conflicts in the Ukraine and Syria. Trump said of Putin:

I got to know him very well because we were both on 60 Minutes, we were stablemates and we did very well that night. But if Putin wants to go and knock the hell out of ISIS I am all for it 100 percent and I can't understand anyone who doesn't.

Let’s just break this down a minute: It’s not really his aggressive foreign policy ("someone" should probably deal with ISIS) that’s the issue here. What is an issue is that there is no way Trump and Putin were hanging out backstage at 60 Minutes, though it admittedly did make for good debate fodder. Just after Trump’s response, Carly Fiorina answered and took a nice punch at the real estate mogul. She said that she didn’t know Putin from a “green room,” but from a private meeting, reinforcing the idea that she is a serious candidate who would get to meet privately with world leaders and then implying that Trump is sort of an unserious candidate, the kind of guy who knows his way around Hollywood and TV studios.

60 Minutes is a weekly news show and they have huge budgets, so Putin was definitely interviewed in Russia. In fact, if you watch the Putin episode, they are in Russia. Was Trump in Russia? We reached out to CBS just to confirm, but they weren't available for immediate comment. But anyway, media types online aren’t buying it:

It’s obvious why Trump would want to make it seem like it was a regular Sunday afternoon gathering at the CBS studios — there are probably some people who would wonder why Trump and Putin would air back-to-back on the same show. To some, it could look like a PR nightmare. Trump was trying to bridge that gap and make it look like he could solve tricky foreign policy and be an entertainer on television. But that’s just not the case. Tomorrow, if anyone calls him out on it for real, I’m sure it will just be a misunderstanding. (Although where I come from, that’s just a lie.)