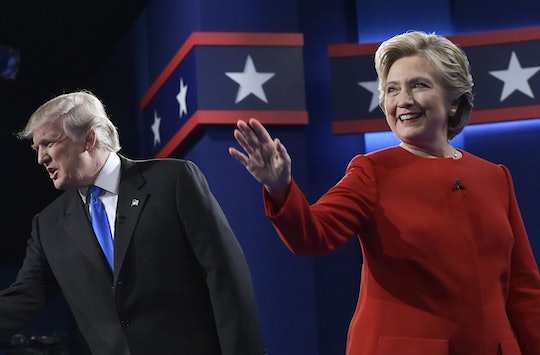 Did Donald Trump Say Climate Change Is A Hoax? Hillary Clinton Called Trump Out Early On

It goes without saying that many hot button issues were on the table at the first presidential debate on Monday night. The candidates were expected to touch on the economy, immigration, and the environment; specifically climate change. It was no surprise, then, that within the first segment of the debate a comment raised a questionable red flag: Did Donald Trump say climate change is a hoax? Hillary Clinton wasted no time calling Trump out early, and rightfully so.

Clinton said at the presidential debate on Monday night that "Donald thinks climate change is a hoax perpetuated by the Chinese." After this statement, Trump interrupted Clinton and denied having ever said that. Trump said over Clinton, "I did not say that, I do not say that."

Clinton was referring to a series of tweets that Trump had posted in recent years. In 2012, Trump wrote that "the concept of global warming was created by and for the Chinese." In another tweet from 2013 Trump wrote, "Global warming is a total, and very expensive, hoax!" And again in 2014 Trump tweeted that global warming is a way to "justify higher taxes." According to The Washington Post, he later said he was joking about the China tweet.

According to The Washington Post, the Republican candidate has repeatedly said he isn’t "a believer" in global warming, climate change, or that humans have played a role in the Earth's climbing temperatures.

Trump said the following in an interview with The Washington Post when asked about his thoughts on climate change:

I think there’s a change in weather. I am not a great believer in man-made climate change. I’m not a great believer. There is certainly a change in weather that goes – if you look, they had global cooling in the 1920s and now they have global warming, although now they don’t know if they have global warming. They call it all sorts of different things; now they’re using "extreme weather" I guess more than any other phrase. I am not – I know it hurts me with this room, and I know it’s probably a killer with this room – but I am not a believer. Perhaps there’s a minor effect, but I’m not a big believer in man-made climate change.

Clinton, on the other hand, plans to act on climate change and implement green energy if she wins the presidency and has repeatedly said that she sides with the science and evidence.

While the Maldives are sinking and the Artic's ice caps are melting, climate change remains is an incredibly urgent and vital issue. An issue so monumental that it's universally important to all demographics that will be voting on Nov. 8. So, setting the record straight on Monday night was a step towards solving this global environmental crisis.