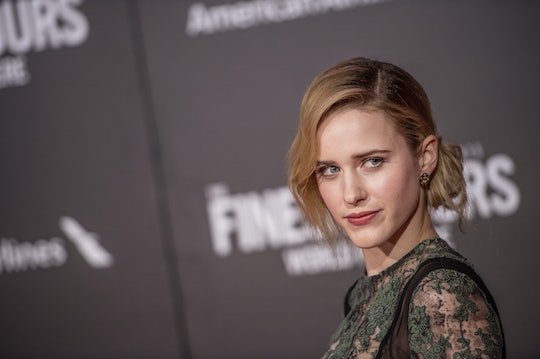 Did Doug Actually Kill Rachel In ‘House of Cards’? Some Fans Weren't Happy With The Ending

There are few things more frustrating than watching one of your favorite characters get killed off in a show, but such was life for fans of Rachel Posner in the Season 3 finale of House of Cards. Even though it once seemed as though Doug’s misdeeds had finally come back to bite him (in the form of a rock-over-the-head, self-defense beatdown by Rachel herself), Doug not only survived, but ultimately appeared responsible for killing Rachel at the end of last season. But given the show’s penchant for twists and turns, it has to be asked: did Doug actually kill Rachel in House of Cards? Fans have speculated since the finale — mostly just because we liked Rachel so much, let’s be honest — but according to E! News, Doug Stamper himself (aka, actor Michael Kelly) has said that, yes, Rachel is in fact dead.

Even though Doug returned after appearing to have died at the end of Season 2, Kelly told E! News that Doug really did kill Rachel, saying, “it's all there on screen. You see him shovel the dirt on her head.” And despite Doug and Rachel’s complicated relationship (to say the least), Kelly says Doug pretty much had no choice but to do it:

He couldn't go back to Francis and be like, 'I'm here, I'm ready, everything's taken care of, we're back,' unless he did that thing. She had to be gone.

But, of course, not everyone feels that way. Following the finale, TV Line’s Michael Ausiello spoke with House of Cards creator Beau Willimon about how totally not impressed he was with Rachel’s death — both because he liked her as a character, but also because he felt like killing her off was too predictable (since pretty much all of the big threats to Frank Underwood thus far have just been killed off). But, like Kelly, Willimon argued that Doug had to choose Frank over Rachel (and, also, that there are plenty of threats still alive on the show, even with Rachel gone):

The [goal] of [Doug’s] recovery, for him, was getting back into [Frank’s] inner circle… And the only way to do that was to for him to tie up this loose end that had been plaguing the Underwoods for the bulk of three seasons, and become a brother in blood with the man that he is willing to make any sacrifice for. If he had not killed her, then he would be reverting back to where he was in Season 2, where he was not being entirely truthful about Rachel, where he was not getting the job done. And he and [Frank] paid a price for that.

So what’s next for House of Cards? Now that Season 4 hit Netflix on Friday, we have a lot to look out for, according to the New York Times. What will happen to Frank now that Claire’s pretty much gone? What can we expect now that Heather Dunbar and Jackie Sharp have banded together? And, of course, what will Doug be like now that Rachel is officially out of the picture?

Speaking of Rachel, it looks like it won’t be long until actress Rachel Brosnahan pops up again in a new project — according to Deadline, she is set to join the cast of Woody Allen’s upcoming six-episode series for Amazon, which will also star John Magaro, Elaine May and Miley Cyrus.

In the meantime, let the Season 4 bingeing begin.