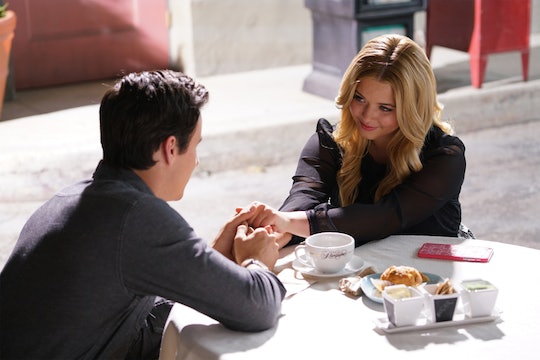 Did Dr. Rollins Push Ali On ‘Pretty Little Liars’? This Hospital Trip Was An Accident

I didn't want to believe that Ali was in another life-threatening situation when I saw the preview for the "Did You Miss Me?" episode of Pretty Little Liars, but sure enough she was. Hasn't this girl been through enough that she doesn't need to worry about walking around in heels and falling down a flight of stairs accidentally? Then again, maybe it wasn't an accident. Even though it would be extreme to consider, what if Dr. Rollins — Elliot — pushed Ali down the stairs on Pretty Little Liars? Are we sure we can trust this guy yet — we don't know much about him. Hell, we can't trust people we do know a lot about on this show.

On Pretty Little Liars, Ali falls down the stairs while on her honeymoon. Or she's pushed down the stairs. Or maybe it was an encouraging nudge by her dear hubby? Either way, something happens that lands Ali in the hospital, and it's pretty suspicious. We see Ali's heel twist while standing at the top of the stairs, with Dr. Rollins, when she takes a bad stumble down the stairs. Luckily, she lives — can you imagine if that was her end after all of this? — but it's still a scary enough situation that it lights the fire under the Liars's butts to really take action.

But was it Dr. Rollins who actually pushed Ali? Personally, I don't trust the guy. He and Ali married so quickly after Charlotte's death that it felt like there were some motives there that weren't genuine behind it. The guy had a heavy hand in Charlotte's treatment at Radley, and I'm not sure if he can be 100 percent trusted.

With that said, it seems like Dr. Rollins — are we on good enough terms yet to call him Elliot? — didn't push Ali. It seemed to be an accident, where he was just standing next to her. One thing we can blame on him is that he doesn't have the quickest reflexes. Maybe if he had quicker reactions he could have stopped Ali from falling down the stairs. OK, now I'm just looking for reasons to not trust Elliot.

But before you get too excited about this being an A-less visit to the hospital, hold on. At the hospital, Hanna finds a card (definitely from their stalker) with their faces on it, and the two hospital-ridden Liar's pictures have a huge "x" over their face. Definitely not a subtle move by Uber A, but it certainly sends a message.