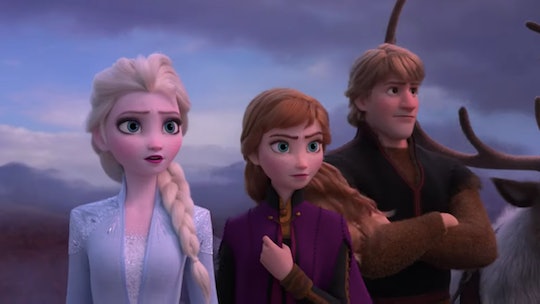 Though it is still many moons until we finally get to see the follow-up film to the 2013 mega-hit, Frozen, people are already beginning to speculate what could be in store for fans. For example, did Elsa and Anna's mom have powers, too? This fan theory will kind of blow your mind.

What we know so far is that, according to DigitalSpy.com, the second Frozen film will center once again on the characters Elsa and Anna as they embark on an adventure "far beyond" Arendelle. It's vague, and honestly, it's as much as we're getting from producers right now.

Co-director Chris Buck told Fandango, however, that a lot of the story could be reserved for Elsa's character development. "She had such a dramatic journey, and at the end she's just starting to feel like she can open up and have some fun again," he told the site. "We could have fun with Elsa. And that personality... you will see in the next one."

Part of "having fun" with that character, though? Potentially not only meeting her mother, but engaging both of the sisters' parents on the journey as well. Why do some fans think that the new movie will introduce Anna and Elsa's mother, and that she'll have powers? Well, it's a pretty convincing logic.

The movie's trailer introduced two new characters: a red-headed woman who displays "some form of telekinetic power" and a blonde-haired man, according to ScreenRant, which posits that these are actually Anna and Elsa's parents, who are not dead, as the first movie suggested with the storm at sea. (Hey, they could have survived, and been stranded or displaced somewhere. There were no cellphones whenever this took place.)

It should also be noted that the trailer opens with Elsa standing in front of the ocean during a storm, and then using her freezing powers to create ice on which she can walk. She attempts to try to walk on the water — it doesn't say where she's going — but it could be a symbol of her finding her parents in some way, given that it was how they disappeared in the first movie.

If she's successful, it would make sense. (This also ties into the whole "adventure where they've never been" concept.) What makes the theory even more convincing is the fact that two of the movie's songwriters, Kristen Anderson-Lopez and Robert Lopez, told Variety that the second film will allow the audience to "know the parents a lot better." (Yeah. Seriously.)

On top of this, according to Entertainment Weekly, producer Peter Del Vecho was previously said that the second film will elaborate and explain parts of the first, seemingly indicating that it could be possible that certain characters are brought back from long ago. Say, for example, a certain set of parents.

When asked about how the film production was going, he told Entertainment Weekly: "Like all movies, it will evolve... Now that we’ve been involved in it for awhile, what’s exciting is it feels like it builds on the first movie. You understand things better in the first movie after you’ve seen the sequel.”

Be that as it is, the film isn't set to debut until later November this year, so we have almost nine months left to speculate. Let the theories begin.