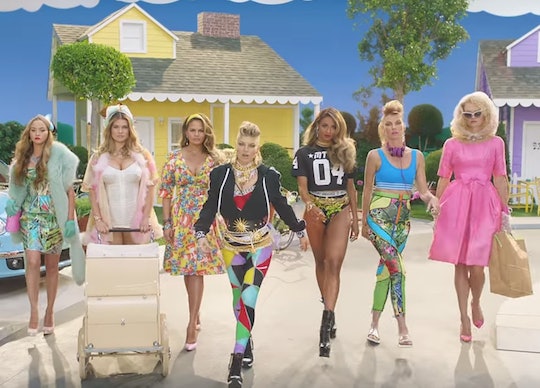 Did Everyone In Fergie's 'M.I.L.F.$' Video Breastfeed? The Video Hopes To Fight Stigma

Despite the Barbie Dream House aesthetic, Fergie's new music video is strikingly sexy. Though critics are still debating whether "M.I.L.F.$" actually achieved its objective of empowerment, there is one element of the messaging that speaks to the evolution of motherhood. As a "M.I.L.F." truck rolls by, the driver spots Chrissy Teigen breastfeeding her baby on a bench. Now that there's a national conversation about breastfeeding in public, Teigen's appearance makes an important statement. Did everyone in Fergie's "M.I.L.F.$" video breastfeed? They didn't all bare their breasts on YouTube, but several of the stars publicly championed breastfeeding after becoming moms.

The term "M.I.L.F." doesn't have a traditionally woman-friendly connotation, but Fergie put her own spin on it for her new single. The singer told Entertainment Weekly that the sexually-charged "M.I.L.F.$" music video is all about celebrating moms:

Changing the acronym to Moms I’d Like to Follow is about empowering women who did it all. They have a career, a family, and still find time to take care of themselves and feel sexy. With a wink of course :).

Fergie packed the video with celebrity mothers strutting their way through a candy-colored neighborhood. In an interview with People, Teigen revealed that Kim Kardashian West convinced her to take a starring role onscreen alongside daughter Luna (who, at the time, was only about four weeks old). Though the breastfeeding clip is one of the most talked-about moments in the video, Teigen said it wasn't planned. Instead, she decided on the spot that she wanted to "capture this moment with her" and later called it "beautiful."

Teigen hasn't been shy about breastfeeding (according to Cosmopolitan, she even shared a breastfeeding photo on Snapchat back in May), but she isn't the only woman featured in the video who's opened up about her nursing experience. Kardashian West said that she had to stop breastfeeding Saint West because North West didn't want her to. Yahoo! Style reported that North even tried to pull Saint away from her mom's chest. Ciara also breastfed her son, Future Zahir Wilburn. Ciara told Yahoo! Style that she had to work it in to her post-pregnancy workout routine:

Alessandra Ambrosio also used nursing to her advantage. Us Weekly reported that Ambrosio said, in addition to chasing after her children, breastfeeding helped her lose the baby weight. Several other models featured in the video breastfed on camera for other projects. Angela Lindvall famously posed for a 2006 breastfeeding photo for Vogue, according to The Journal of Nursing. Gemma Ward's nursing snapshot ended up on Instagram, and Tara Lynn is shown breastfeeding in a Lane Bryant commercial that several TV networks refused to air, Revelist reported.

Fergie talks about breastfeeding, too. Back in 2013, she even discussed it during an appearance on Fashion Police, according to NBC Latino. Now, her new video aims to demolish taboos and strengthen moms everywhere (but be warned, it's NSFW).

Fergie told Access Hollywood that the video for "M.I.L.F.$" is supposed to be playful:

This is definitely empowering moms to have fun. Being a mom and having a career, taking care of yourself and still being able to be flirty and fun and a little naughty sometimes — there's nothing wrong with that. Society tries to tell moms what they should and shouldn't be, and it's just a little freeing to have fun with pushing those limits a bit. I might do it a little bit more than others, but that's just who I am.

Whether or not moms ultimately adopt "M.I.L.F.$" as an anthem, it's exciting to see more mothers helping to destigmatize the decision to breastfeed in public.