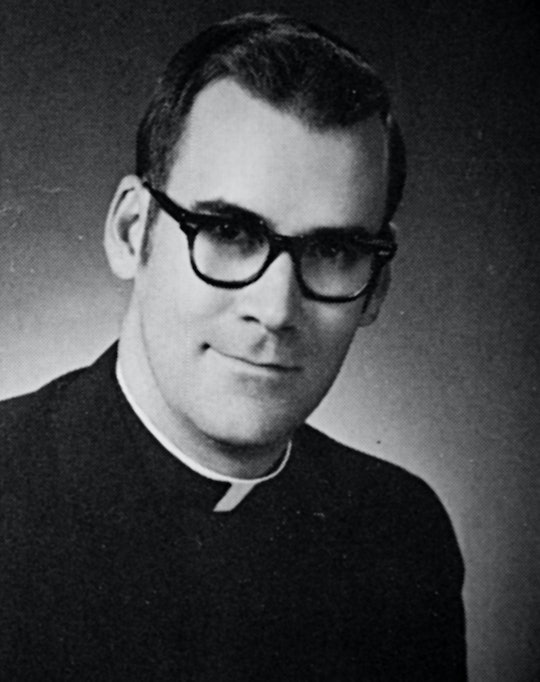 Father Neil Magnus Is A Possible Suspect On 'The Keepers'

Almost 50 years ago, a Baltimore nun named Sister Catherine Cesnik was found choked and beaten to death two months after her mysterious disappearance. No culprit was ever charged, and it was long considered a cold case. Netflix's new series The Keepers (which is already being compared to Making a Murderer) follows the amateur investigation led by Cesnik's former students and involves the question of whether her murder was tied to a rampant clergy sexual abuse scandal at the Catholic school where she worked. The docu-series presents people in Cesnik's life that may have had something to do with her death, leading viewers to wonder: Did Father Neil Magnus kill Sister Cathy?

While The Keepers is technically about the unsolved murder of the 26-year-old Baltimore nun, it also heavily deals with the potentially-related abuse that allegedly took place at Archbishop Keough High School at that time. Cesnik was employed as a teacher at Keough before her death (though she'd left to work at another high school in the months before her murder), according to The Huffington Post.

The amateur detectives at the heart of The Keepers are some of Cesnik's former students and other Keough alums with an interest in seeking justice for their beloved former teacher (including Abbie Schaub, Gemma Hoskins, Teresa Lancaster, and Jean Hargadon Wehner). Several of them allege that they were among many who were sexually abused and psychologically terrorized during their time at the school (primarily by Father Joseph Maskell, the high school's chaplain and chief spiritual and psychological counselor for two years) and that they'd confided in Cesnik about their abuse. The central conceit of the Netflix show (and the major theory behind the nun's murder) is that she was killed because she was potentially going to go public with her knowledge of the crimes. (Maskell denied initial accusations until his death in 2001, and was never charged of a crime.)

Though Maskell was never formerly convicted of having abused his young students, the Catholic Church has formerly acknowledged his part in the accusations. Sean Caine, an Archdiocese of Baltimore spokesperson, told HuffPost that the church acknowledges that the priest was "credibly accused of sexual abuse of minors."

As despicable as Maskell's crimes were in their own right, the saga gets even worse. According to what several of the victims told HuffPost in various interviews for a feature story on Cesnik's murder, Maskell had essentially turned the school into a prostitution pedophilia ring, often abusing the young girls in conjunction with fellow priests, like Magnus (the school's Director of Religious Services), as well as forcing and manipulating them into having sex with other men in the community outside of the church. Wehner recalled an incident in which she'd been called into Maskell and Magnus' offices for "joint counseling sessions" — sexual abuse in the name of "spiritual healing."

According to one anonymous student who also spoke with HuffPost in an interview for the same feature, Magnus accompanied Maskell in interrupting her meeting with Cesnik by coming into her apartment without knocking the night before the nun disappeared. The anonymous woman said that she'd been discussing the rampant abuse at the school with her former teacher when the two priests barged in.

Maskell died in 2001 and Magnus in 1988, having consistently denied the allegations against them until their respective deaths. If The Keepers does manage to uncover any additional evidence helping bring justice to Cathy Cesnik, it may be too late. But hopefully, Cesnik's death will be resolved once and for all, to at least bring some measure of peace to the abuse survivors and to Cesnik's living family members.