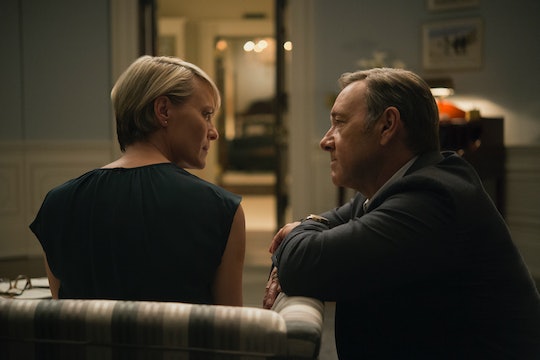 Did Frank & Claire Underwood Get A Divorce On 'House Of Cards'? Their Future Looks Grim On Season 4

Last season's dramatic House of Cards finale left Frank and Claire Underwood on shakier ground than we had ever seen the couple previously. And Season 4 doesn't look much better. (Spoilers ahead for Season 4, Episode 1.) In fact, at the beginning of the episode wondered if Claire and Frank Underwood got a divorce? Usually a tightly coordinated, Macbeth-inspired power couple, the Underwoods experienced a breakdown in communication during Season 3 that left Claire feeling neglected and out of the loop, and Frank feeling frustrated with her resistance to his master plans. Claire's final straw in the Season 3 finale was when, after dying her hair back to blonde from her preferred dark brown just because polling (and thus, Frank) told her to, she realized she was left out of the plot to squash evidence of her abortion once and for all. Frank, with the help of Doug, manages to literally set fire to Heather's $2 million extortion scheme, misguidedly thinking that "taking care of it for Claire" is an act of chivalry.

Claire was, of course, infuriated over being left out of the handling of her own scandal, telling Frank, "We've been lying to each other a long time." And the opening of Season 4, unsurprisingly, does not find the First Couple reconciled. Claire has abandoned Frank and his tragic FU2016 slogan ("America! We can make it work!") on the campaign trail just ahead of the New Hampshire primaries. The media is running wild with theories that the couple is experiencing marital issues, effectively zapping the Underwood campaign of the momentum it first picked up after the Iowa caucuses.

When we do find Claire, she's escaped to Texas to hatch a plot to run for Congress there, which involves disrupting a Congressional legacy already in the works. She manages to do all of this away from Frank's utter disapproval with the help of Neve Campbell who plays Leann Harvey, a powerful Texas Democrat whom Claire is clearly eyeing for her own campaign's Chief of Staff.

With the help of Doug, Frank tricks Leann into telling them exactly what Claire is up to and promptly shuts it down. (Classic Frank. Classic Doug.) Keep in mind that President Underwood still has to publicly explain the First Lady's impromptu visit to Texas in the middle of a primary race, and oh, explain it he does. Frank (via Doug, natch) manages to get his hands on Claire's mother's medical records, which reveal she is in the middle of a three-year cancer battle, unbeknownst to Claire.

Frank breaks the news to her in the cruelest way possible, solely to inform her that he's a press conference set up outside so that the First Lady can explain to the American people why she's in Texas caring for her ailing mother — certainly not to focus on forwarding her own political career while her husband is running for a second go around in the Oval Office.

The future of the couple's relationship looks grim, especially with Frank constantly trumping Claire's desires for his own gain. Will it ever be Claire's turn? It doesn't seem like it's possible as long as her husband is fighting a losing battle to secure his second term.