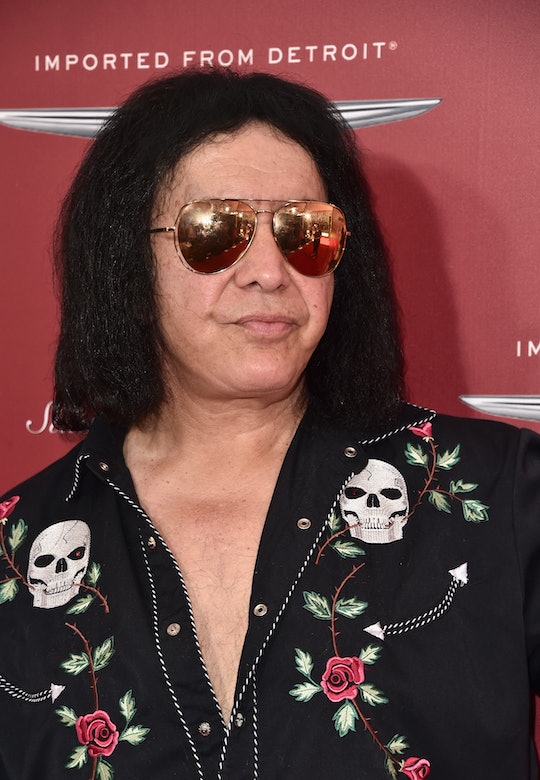 Did Gene Simmons Endorse Donald Trump? He Claims The Candidate Has "Changed The Game"

As the Republican party debates whether or not billionaire frontrunner Donald Trump should snag the presidential nomination this summer at their convention, they have a new opinion to take into consideration. On Monday, Kiss frontman Gene Simmons endorsed Donald Trump as his preferred candidate to take over the Oval Office come next January. Well, sort of.

At the John Varvatos 13th Annual Stuart House Benefit in West Hollywood this weekend, Simmons told People magazine that he thinks the country could use a good dose of whatever Trump has to offer the country. Simmons said that although he didn't want to divulge who he planned on ultimately voting for, he respects how Trump has "changed the game," much like Simmons' own band did when it came to bringing over-the-top antics to hard rock in the '70s.

The glam metal rocker told People that he appreciates how Trump puts himself out there, even if it gets him in trouble sometimes. "This guy funds his own campaign, and he is going to say things that tens of millions of people actually say quietly because politically it's 'incorrect.'" He added that Trump's appeal to some voters is that he "doesn't care" what people think of him."I think people are sick and tired of politicians who have words that are written by other people," he said.

The metal legend probably knows what he's talking about, too, since he had a spat with the candidate when he was a contestant on the third season of Celebrity Apprentice. Although he was eventually eliminated, the musician managed to get under Donald's skin in early on by "insulting" the real estate mogul's daughter, Ivanka. Simmons had told Ivanka that she "could wait" during a progress visit while his team worked on a project. Trump later reprimanded him saying, "It was just unnecessary." He told Simmons that his behavior was "not a strategically intelligent thing to do," according to a People recap of the episode at the time. Simmons later got down on one knee to apologize in the final elimination. Talk about management skills. (Let's pause and just imagine world leaders bowing to Trump as U.S. president in two years.)

Given his almost-endorsement this weekend, there doesn't seem to be any beef between the two stars anymore. But it might not be exactly the kind of character endorsement Trump wants right now as many in the political sphere take issue with his seemingly racist positions. Simmons, too, was recently accused of racism for saying that he looks forward to the "death of rap," and for comments he made about hip hop group N.W.A.'s induction into the Rock and Roll Hall of Fame. Simmons, who was inducted to the Hall of Fame in 2014, and former N.W.A. member Ice Cube have been duking it out on Twitter for most of April, debating the merits of hip hop band while legendary rock groups like Led Zeppelin haven't yet enjoyed the honor.

If anything, both Trump and Simmons excel when it comes to speaking their respective minds, even at the risk of offending swarms of voters or fans. The next time he takes a stage, maybe The Donald should use "Rock and Roll All Nite" as a campaign anthem, just to get everyone riled up. It doesn't look like Simmons will mind.