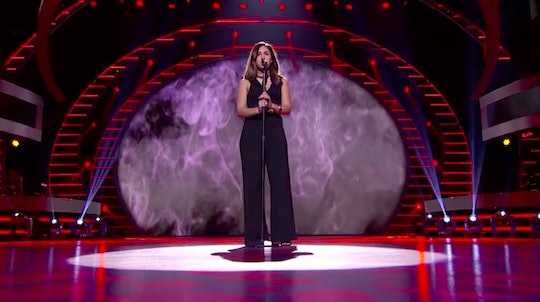 Did Gianna Isabella Sing The Same Song Twice On 'American Idol'? She May Have Had A Good Reason

There's one week until the final Top 10 of American Idol is announced for all of America to hear. This week, however, contestants are still competing for America's vote to be voted into the Top 10 finalists, singing songs that best show off their vocals. But at least one of tonight's performances also left fans wondering: Did contestant Gianna Isabella sing the same song twice?

It turns out that the contestant had sung Annie Lennox's "I Put a Spell on You" on Idol once before.

Isabella performed the song just two weeks ago on Wednesday Feb. 10 in front of the American Idol judges and live studio audience for a taping that was broadcast to the rest of the country. The performance was part of the Top 24 round, where, after performing solos as well as a duet with a former Idol contestant, the judges picked 14 contestants to move on to the next round.

"Your voice is undeniable. You really can sing," judge Keith Urban said of the Top 24 performance.

"The voice is so real," judge Jennifer Lopez said. "You have one of the most privileged voices of the competition. It truly is so strong."

Judge Harry Connick agreed with them, before offering a critique to Isabella. "How can you arc your performance? Challenge yourself to find as much meat in there as you can," he said.

The critique must have left a good taste in Isabella's mouth and a lasting impression on the contestant, as she took the judge's comments to heart and performed the song again in front of the judges and the rest of America to hear.

Personally, I think the song shows off Isabella's strong vocals and gives a good impression of herself for the Idol audience. I think it is a good preview of all that she has to offer in the competition and gives a good idea to the audience of how she will be as a performer.

However, it could also be a mistake for her. Since audience members have already seen Isabella perform the song, it could not make her stand out from the rest of the competition. When a contestant sticks to songs people have seen them perform already on the show, it tends to make them seem a little "one note", appearing to be safe rather than a risk-taker.

It is up for the audience to decide now. After the judges already selected four contestants to be in the Top 10, America now gets to decide who they want in the Top 10. This means fans will get a chance to vote in their their favorites (like Isabella) before the live episodes with the Top 10 begin.

Votes will be crucial this week for Isabella and the rest of the contestants as they look to becoming a Top 10 finalist on American Idol.