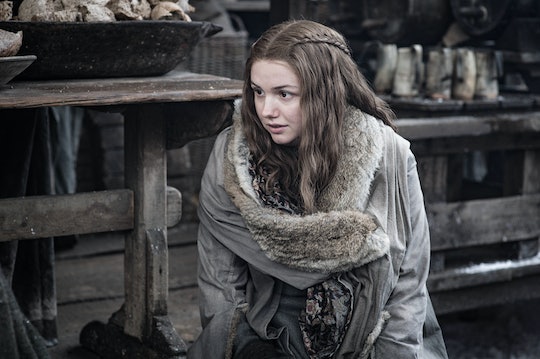 I’ll be honest, I was super excited about the Battle of Winterfell on Game of Thrones, but seeing some of my favorite characters die was absolutely heartbreaking. Luckily, my favorite maester-in-training Samwell Tarly, survived, managing to kill a few wights along the way. But what happened to the rest of his family that was waiting it out in the crypts? Did Gilly die on Game of Thrones, and what happened to Little Sam?

Warning: Spoilers ahead for the Season 8 Episode 3 of Game of Thrones.

As many fans have complained, some of the crypt scenes may have been too dark to decipher exactly what was going on, but in the final moments of “The Long Night,” you can clearly see that Gilly and Little Sam survived the attack of the undead. As a safety precaution, they were hiding underground with Tyrion, Sansa, Missandei, Varys, and the rest of the women and children at Winterfell. But it wasn’t until the Night King raised the dead, including the bodies buried in the crypts, that they realized how much trouble they were in.

When the dead started climbing out of their coffins in the crypts, Gilly and Little Sam managed to stay safe, probably by hiding behind the statues like the rest of the survivors. After Arya jumped on to the Night King and slayed him with her Valyrian steel dagger, the dead are seen dying, and you see Gilly and her son emerge from the shadows of the crypts alongside Varys, Sansa, and Missandei.

After everything Gilly has been through in her life, I’m not at all surprised that she survived the Great War. She was once a captive of her father, Craster — a man who impregnated his daughters and forced them to give their male sons to the White Walkers. She’s known about the dead her whole life, and when it was time for them to take Little Sam, she fought them off and saved him.

Plus, Gilly played a crucial part in revealing the truth about Jon’s identity. If it wasn’t for her out-loud reading of the old maester’s diary, Samwell never would have known that Rhaegar and Lyanna were legally wed, and Jon would never know he is the true heir to the Iron Throne.

It’s unclear what role Gilly will have going forward, but fans can rest assured she’ll be back next week. In the preview for Episode 4, Gilly is seen standing inside the grounds of Winterfell, and it looks like she’s seeing off Jon and Sir Davos as they ride out of the castle. Knowing that Daenerys and Jon are taking their war to Cersei in King’s Landing, it’s very likely that they leave Samwell and Gilly behind in Winterfell to take care of things.

It will be interesting to see how Samwell feels about Daenerys now that the war is over, and whether or not he tells Gilly that she killed his father and brother. Before the White Walkers attacked, Samwell tried to convince Jon to take the throne from Daenerys, but after so much death, he may change his mind. Plus, if Dany pardons him like he asked her to, Samwell could go on to marry Gilly, which would leave fans with at least one happy ending.

New episodes of Game of Thrones air Sundays at 9 p.m. ET on HBO.