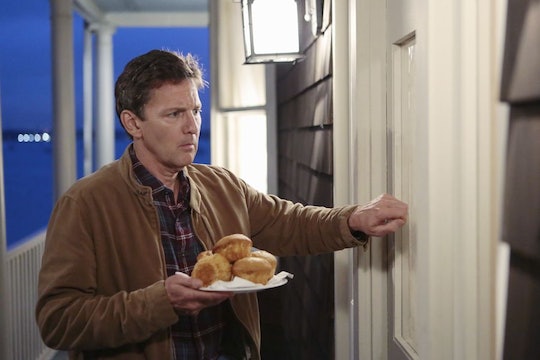 Did Hank Abduct Adam On 'The Family'? His Secret In The Ceiling Is Definitely Important

What's the deal with clearly-hiding-something neighbor Hank on The Family? From Episode 1, there was obviously something off with the man that had a close relationship with Adam Warren. The first thing "off" that comes to mind is the fact that he confessed to murdering Adam when he supposedly didn't. Yeah, that off. As the show progresses, we're learning more and more about him and his relationship with Adam, and the more we learn the more it appears that Hank did abduct Adam on The Family. If not, he must of had something to do with his disappearance.

In the beginning of the second episode, Hank does something weird. In the middle of the night, he gets up and opens up the ceiling tiles of his bedroom and pulls out a can. What's in the can, we don't know — at least at this time in the episode. He then proceeds to hold the can close to his body and rock back and forth on his bed. Like I said, it was strange.

In a flashback, we see that Adam and Hank had a relationship. From what we see, they would work on ships in a bottle in Hank's garage. To Adam, Hank was a nice neighbor. To Hank, well, I'm not sure what Hank was getting out of their friendship.

What we do know is that Hank has taken a liking to Adam. He comes to the rally that Adam disappeared at. He lied about being there to the police. And, when Adam goes missing, he bleaches his entire garage to get rid of a trace of Adam being there (or so it seems).

We learn later in the episode that there is a pair of mittens inside the can. The mittens have the name Adam embroidered in them, so do with that what you may, but I personally think that's a pretty bizarre item to keep hidden in your ceiling.

When Hank comes face to face with Adam, he says something that seems to be very on-brand for him. From the end of his driveway, he says to 18-year-old Adam, "Remember me? I'm the guy that killed you," because that's what you say to someone after you have confessed to their murder, right?

So, what is Hank hiding? Why does he have Adam's mittens (assuming there's not another Adam)? Was he taking precaution by bleaching the garage, or was he just scared because he knew that the police "had stuff on him" and he didn't want it to make him more of a suspect? Either way, Hank may be released from jail for Adam's murder, but he isn't out of the woods quite yet.