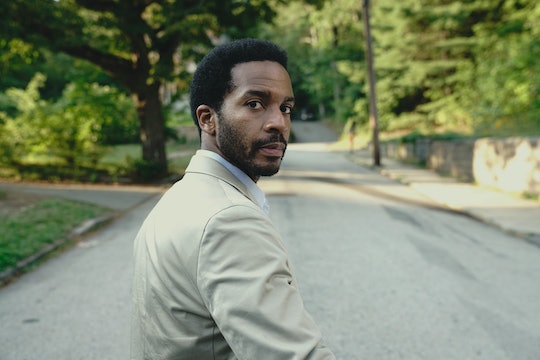 The suspense just keeps on building in Castle Rock, and with the release of the town’s mysterious new resident, it looks like things are going to get a lot darker. But it is the mystery surrounding Henry Deaver’s past that seems to be at the center of all the secrets in the town. Did Henry try to kill his father on Castle Rock, or is he at least partly to blame for his death? While his memory of that time is still lost, the show is incrementally revealing details about what may have happened.

When André Holland’s character, Henry Deaver went missing as a child, his father Reverend Deaver, was recovered from the woods in critical condition. The town of Castle Rock still blames Henry for his father’s subsequent death, insinuating that he lured his dad out into the woods to push him off a cliff. But because Henry can’t remember what exactly happened, it is hard to gauge his innocence or guilt.

However, there are some clues that could point to Henry’s motivation and means to kill his father. In Molly Strand’s (Melanie Lynskey) flashbacks from a previous episode, you see Henry’s anger towards his father, especially when he curses “F* you, Dad” while mysteriously burning a VHS tape with his own name on it. Why he hated his father is still unknown, but it could have something to do with their late night forest outings.

Some Reddit users have theorized that Henry was being abused by his father out in the forest, but Reddit user mander4ever thinks it has to do with the loud noise heard in the woods when Henry first magically appeared on the ice after he went missing. “We do hear Henry's Dad ask in a flashback while they are walking through the woods, ‘do you hear it now?’ and then we hear The Kid ask Henry the exact same thing when they talk for the first time, wonder if it could be related to the loud sound we heard in the beginning.”

In a previous episode, a young Molly is shown unplugging Reverend Deaver’s ventilator and killing him. Molly — who shares a psychic connection with Henry — feels his emotions and his feelings. Reddit user jhawksmoor theorized that Molly may have been carrying out Henry’s wishes because she could feel what he wanted. “I think she's connecting with him in what he feels and thinks, but doesn't see through his eyes,” the Redditor wrote. “I think she killed the dad because of what Henry was feeling. Either to protect him or carry out his feelings.”

Many fans have also theorized that Molly has the “shine”, the same psychic abilities that Jack Torrance's son Danny had in The Shining. But Reddit user taylormbates believes that Henry may also possess the “shine” because Molly can hear him louder than anyone else. And in The Shining, Jack’s son Danny was only able to communicate with the cook Dick Hallorann who also shared the gift.

The user even goes on to theorize that Henry could actually be Dick’s son, and could have inherited the “shine” from him. “I think Henry may be Hallorann’s son and that’s why he has the ability to shine,” wrote taylormbates. “Dick’s character is also mentioned in IT (book) as living in Derry, which is located near Castle Rock. I think it is entirely possible that Dick fathered a child while living in Derry, and that child ended up being Henry Deaver.”

My own observance is that when Molly is seen going to the Deaver house to kill Henry’s father, she is all too comfortable. She knows exactly where the house key is hidden, she puts on Henry’s hoodie, and walks upstairs straight into his dad’s room. Its like she knew exactly where to go and what to do, and with no remorse whatsoever. To me, this shows that Henry’s consciousness may have been playing a part in her actions, which means he may share in some of the guilt.

Fans of Castle Rock will just have to wait to find out what dark secrets Henry is hiding, because in a world inspired by Stephen King, you can bet everyone has something to hide.