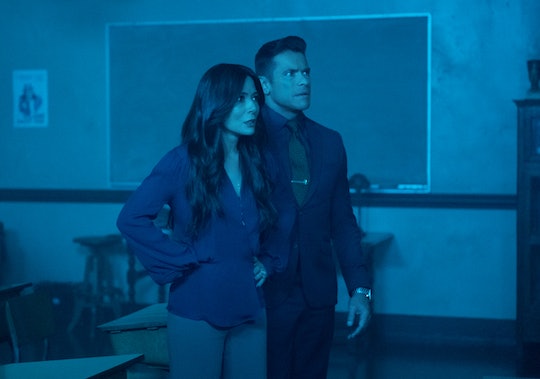 Now that the identity of the Gargoyle King has been revealed, Riverdale fans have a new puzzle to solve. Hiram Lodge was shot in the chest, and the identity of his shooter remains a big mystery. There are plenty of suspects who have the motive to kill him, but some fans think the shooter might be his own wife. So, did Hermione shoot Hiram on Riverdale?

Warning: Spoilers for Season 3, Episode 10 of Riverdale ahead.

In the explosive last minutes of Episode 10, “No Stranger,” Riverdale’s illustrious mob boss finally got what was coming to him. While Hiram was on the phone in his office, bragging about how he’s always a step ahead of everyone, he was shot in the chest, and fell to the ground. The gunshot wasn’t fatal, and Hiram is in critical care at the hospital, but it’s not clear who shot him.

For me, there are plenty of clues that discount Hermione as the shooter. For one, when Hiram got shot, he was on the phone with someone he called “mi amor,” a nickname he often uses when talking to Hermione. Secondly, he didn’t see his assailant, which means the gun was fired from a distance, and that would mean the shooter needed expert aim. Sure, it’s possible that Hermione had the phone in one hand, while she shot Hiram with sniper precision, but I personally think she didn’t do it. She may old animosity towards her husband, but she’s been sitting by his bedside at the hospital, and that shows she still loves him.

However, anything’s possible on Riverdale. Hermione could be pretending, and she could have easily had someone else do the shooting for her. She is well connected, the mayor of Riverdale, and now that she’s named FP Jones the new Sheriff, it’s totally possible that the two planned out the hit. But still, as all things go on Riverdale, I think there is more to the story than meets the eye.

Fans have been sharing their theories about Hermione and Hiram on Reddit, and one user, maryssmith, pointed out that Hiram being dead wouldn’t help Hermione in any way, so it doesn’t make sense that she shot him. “The next big suspect seems to be Hermione and/or FP, who are working together against Hiram,” wrote the Redditor. “The catalyst here would be Hiram telling Hermione to make Claudius the sheriff, which seems like it would ruin Hermione's secret plan. The problem here is that her plan has to involve exposing her husband's crimes and co-conspirators and that'd be hard to do if Hiram were dead.”

So, if it goes against Hermione’s interest to kill Hiram, who did it? Some fans think it could be Reggie, like Reddit user, insilus, who wrote that they thought “Reggie shot Hiram so he’d get back with Veronica, knowing that Veronica would suspect and break up with Archie.” Another Redditor, rubatosisX12, theorized that it was The Farm cult leader, Edgar Evernever who pulled the trigger. “I think he and Hiram know each other from the past and dislike each other,” the user wrote. “He wanted to take Hiram out because he wants to expand into Riverdale, happening now with SOQM, and has his own development plans.”

Honestly, Hiram has so many enemies, the shooter could literally be anyone. It could be Fred Andrews, who promised to kill Hiram if he came after Archie, or it could have been Alice Cooper under the instruction of The Farm cult. It could have even been Hiram himself, who paid someone to shoot him for one of his elaborate evil schemes.

It’s safe to say that fans won’t know exactly who shot Hiram until later this season, but until then, your guess is as good as mine.