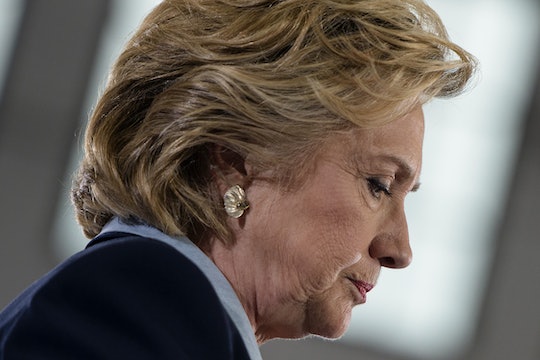 Did Hillary Clinton Really Laugh At A Rape Victim? She Said She Found The Case "Sad"

In Democratic presidential candidate Hillary Clinton's long career as a lawyer, one case has come under public scrutiny. At 27, Clinton worked at the University of Arkansas School Legal Aid Clinic in 1975, and was assigned to defend Thomas Alfred Taylor, a 41-year-old man accused of raping a 12-year-old girl named Kathy Shelton. Clinton successfully struck a plea bargain for Taylor, who served a year in jail. But tapes have surfaced of Clinton discussing the case, and Republican presidential nominee Donald Trump claimed that Clinton can be heard laughing at the victim in them. Did Hillary Clinton really laugh at a rape victim?

The scrutiny of the case started during the second presidential debate, where Trump made reference to the rape victim. "[She is] a wonderful woman, at 12 years old, was raped at 12. Her client she represented got him off, and she's seen laughing on two separate occasions, laughing at the girl who was raped. Kathy Shelton, that young woman is here with us tonight," he said, according to his website.

Trump's claims that Clinton laughed at the rape victim in a 1980s recording of an interview of Hillary Clinton and reporter Roy Reed. The tape, which was made public by The Washington Free Beacon, reveals Clinton discussing the absurdities of the case. Clinton can be heard laughing on the tape, however, she never actually laughs at the expense of the rape victim.

At one point on the tape, Clinton laughs because Taylor successfully passes a polygraph to prove his innocence. "I had him take a polygraph, which he passed — which forever destroyed my faith in polygraphs," she said.

At another point, Clinton laughs at the fact that the prosecutor wouldn't show her evidence, even though she had a right to see it.

It seems as though Clinton is laughing at the absurdity of the case, which she called "sad" and "terrible."

"What was sad about it was that the prosecutor had evidence," Clinton can be heard saying. That evidence — a blood stain on Taylor's underpants — was destroyed once the crime lab was finished with it.

Trump also claims the tape shows Clinton tried to destroy the credibility of the victim by calling her "emotionally unstable." However, it was an expert in child psychology who made the statement, although Clinton did ask that the 12-year-old girl undergo a psychiatric evaluation.

Roy Reed, the reporter who is also on the tape, recently defended Clinton against Trump's claims. Reed said in an interview with Arkansas Online:

I challenge any fair-minded reader of that transcript to make a case that Hillary Rodham was a coldblooded lawyer who was laughing over the plight of the 12-year-old rape victim. I'm probably in a better position than anybody in the world to know what was going on in that interview because there was just the two of us there. I was able to look her in the eye and judge her attitude, and I guarantee you there was nothing sinister in her responses to my questions.

In previous statements, Clinton has defended her handling of the case. Clinton said in an interview with Mumsnet:

When...I was appointed by the local judge to represent a criminal defendant accused of rape...I asked to be relieved of that responsibility, but I was not. And I had a professional duty to represent my client to the best of my ability, which I did. When you're a lawyer you often don't have the choice as to who you will represent. And by the very nature of criminal law there will be those you represent you don't approve of.