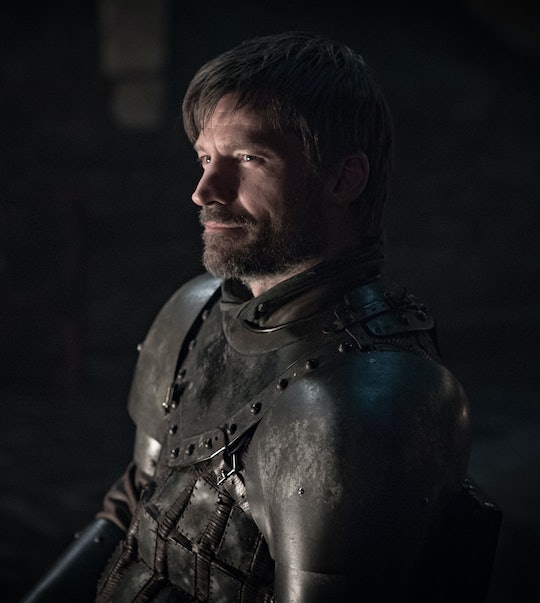 The final, epic battle at the capitol finally transpired in the penultimate episode of Game of Thrones and Jaime Lannister found himself on the receiving end of Euron Greyjoy's sword. But did Jaime die on Game of Thrones? It seemed like he was about to, but then he held on for just a little bit longer.

When Jaime finally arrived in King's Landing — after leaving a freshly devirginized Brienne out in the cold — he actually didn't make it to the Red Keep to be with Cersei before Daenerys' armies descended upon the city. Her one remaining dragon made quick work of the scorpions fashioned by Qyburn, making sure to destroy them all first, before setting fire to the rest of Cersei's men. Jaime never even made it inside the gates.

He tries to sneak in through the castle tunnels but runs into Euron, who challenges him to fight then and there — because why not? Everyone's dying anyway. Jaime fights...well, not nobly, per se. He definitely never got his groove back after losing his hand, and Euron fairly easily plunges a sword into his side. It seems like all is lost, but, importantly, viewers never see Jaime dying on screen.

Lo and behold, he pops up a few arduous battle scenes later, still breathing, and with Euron, much like Oberyn Martell in his disastrous trial by combat, gloating over his victory prematurely. Jaime manages to stagger to his feet and sink a sword into Euron's gut, twisting it, like, kind of a lot? It was excessive. Anyway, off Jaime goes to find Cersei, despite being very seriously wounded, and he does finally make it to her, again, after many arduous battle scenes. The Red Keep is basically crumbling around them as they meet up in the crypts under the castle and Cersei decides this is the moment to realize she doesn't want to die. Kind of too late, my girl!

Jaime does his best to calm her down, reassures her one last time that nothing matters because they're together, and finally, the crypt caves in on top of them. Technically speaking, I guess it's possible for the series finale to open on the Lannister twins somehow crawling out of the rubble, since we never actually see their crushed bodies. But I think it's cautiously safe to say they're super dead.

Jaime and Cersei's final moments together were about as romantic as can be expected, and it is far more satisfying to see him die with her than bleeding out on some rock with Euron Greyjoy. On the other hand, Twitter seemed pretty unilaterally disappointed that Game of Thrones ripped away Jaime's redemption arc just as fans were starting to think he could really be a good guy. Plus, there was a whole faction of fans hoping he'd be the one to kill Cersei in a feat of painful but poetic justice. Sadly, it would seem all Braime hopes are dashed. Needless to say, I would not want to be the one who delivers the news to Brienne.