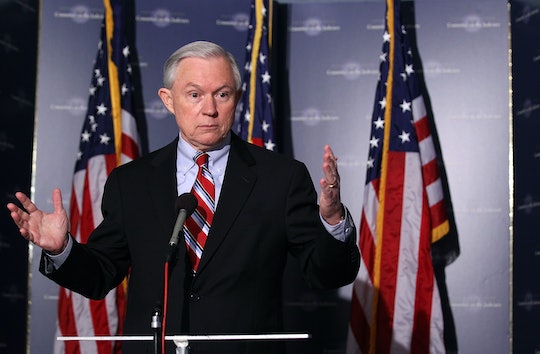 Did Jeff Sessions Break The Law?

During his confirmation hearing for Attorney General, then-Alabama Sen. Jeff Sessions testified that he didn't communicate with Russia. On Wednesday night, The Washington Post revealed that in fact, he'd spoken to the Russian ambassador on two occasions while working on President Donald Trump's 2016 campaign. Did Jeff Sessions break the law, and could he be tried for perjury? It's a very tricky thing to prove. The Department of Justice and the White House did not immediately respond to Romper's request for comment.

First, the facts: Vermont Sen. Patrick J. Leahy asked Sessions in writing, "Several of the President-elect’s nominees or senior advisers have Russian ties. Have you been in contact with anyone connected to any part of the Russian government about the 2016 election, either before or after election day?," according to The Washington Post. Sessions' written reply was simply, "No."

Later, during the hearing, Minnesota Sen. Al Franken asked Sessions, "If there was any evidence that anyone affiliated with the Trump campaign communicated with the Russian government in the course of this campaign, what would you do?" According to CNN, Sessions replied, "I'm not aware of any of those activities. I have been called a surrogate at a time or two in that campaign and I did not have communications with the Russians." In response to the Post's report on Wednesday, Sessions issued a statement saying, "I never met with any Russian officials to discuss issues of the campaign."

According to the Post, Sessions spoke to a group of ambassadors in July during an event for the Heritage Foundation, a conservative think tank. Russian ambassador Sergey Kislyak was among them. Then, in September, Sessions held a private meeting with Kislyak at his senate office. A Justice Department official told the Post that "There’s just not strong recollection of what was said" during the September meeting. Unless the subject of that conversation is eventually made public, it's impossible to prove that Sessions lied to Leahy, because Leahy specifically asked if Sessions spoke to any Russian officials "about the 2016 election." However, Sessions' statement to Franken, that he "did not have communications with the Russians," appears to be false.

But a false or misleading statement isn't necessarily illegal. Section 1621 of Title 18 of the U.S. Code states that whoever "states or subscribes any material matter which he does not believe to be true" under oath "is guilty of perjury." The charge can lead to up to five years in prison. The key phrase is "believe to be true." Sessions could argue that when he said he didn't communicate with Russia, he meant only with regards to the election. And if you think that's a stretch, you must not remember when, in 1998, President Bill Clinton disputed the definition of "sexual relations," and later, the definition of the word "is." Proving that someone intentionally lied in exceedingly difficult; according to a Quinnipiac Law Review analysis, only six people have ever been convicted of perjury before Congress. Absent the ability to read minds, we may never be able to say with certainty whether or not Sessions broke the law.