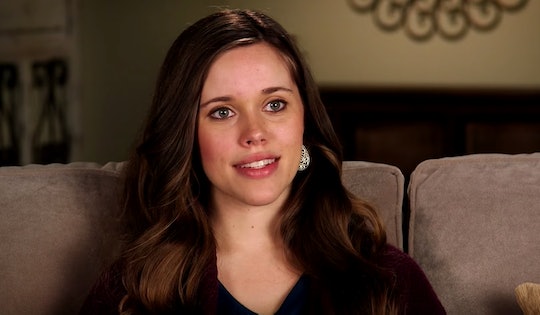 Did Jessa Duggar Ever Have A C-Section? Her Births Have Been Dramatic

If you're familiar with TLC's Counting On, then you probably know that more often than not, the Duggars choose to at least attempt home births. These types of deliveries are supervised by a midwife and her team — and also have backup plans in the event of an emergency. But the overall trend for Michelle and Jim Bob's adult children is to have as little medical intervention as possible during labor and delivery. And doing so from the comfort of their own homes. Now that Jessa is in the final stretch of her third pregnancy, some fans might be wondering: Did Jessa Duggar ever have a C-section?

Jessa — who is number five in the Duggar sibling lineup — is expecting baby number three with her husband, Ben Seewald. (They currently have two sons, Spurgeon, 3, and Henry, 2.) In the midst of the recent Duggar baby boom, Counting On fans may have forgotten how close Jessa is to her due date. That is, until she shared a 38-week bump photo on May 21, according to In Touch Weekly. "I honestly can’t believe it. It seems like this pregnancy has flown by!" the expecting mom wrote on Instagram. "Can anybody else attest to that fact that when you have toddler or two keeping you on your toes, pregnancy just seems to fly by??"

Which means by now, Jessa extremely close to her due date. Take a look at her nearly full-term bump in the photo, below.

But to answer the question about whether Jessa has had a C-section, let's take a look back at her two previous labors and deliveries.

For her first delivery in November 2015, Jessa opted to labor at home for nearly two days before finally delivering Spurgeon. However, she experienced heavy bleeding after her baby boy was born — prompting Michelle Duggar to call 911 and have Jessa taken to a hospital, according to Parents. There, it was determined Jessa needed a blood transfusion due to the high volume of blood she lost.

As for her second home birth with Henry in February 2017? Things were a little less dramatic. “Labor is labor, but it was calm and relaxed,” Jessa told People. “Ben and I were surprised how fast it went."

There you have it! So far, Jessa Seewald has not had a C-section.

It's worth noting that aside from Anna Duggar, Jessa is the only Duggar sibling who has delivered at home. Both Jinger Vuolo and Kendra Duggar opted to give birth to their babies in a hospital setting. While Joy-Anna Forsyth and Jill Dillard both attempted home births, but ended up getting transported to hospitals and having C-sections.

Although Jessa hasn't addressed her birth plan for baby number three, it's probably safe to assume she'll be trying for another home birth. (At least that's what I'm expecting.) And since her labor and delivery with her second child was so fast and uncomplicated, hopefully Jessa will have a similar experience this time, too.

Then again, every birth is different. That's why it's called a birth plan, after all. And as Joy-Anna and Jill Duggar found out firsthand, labor and delivery doesn't always go according to plan.