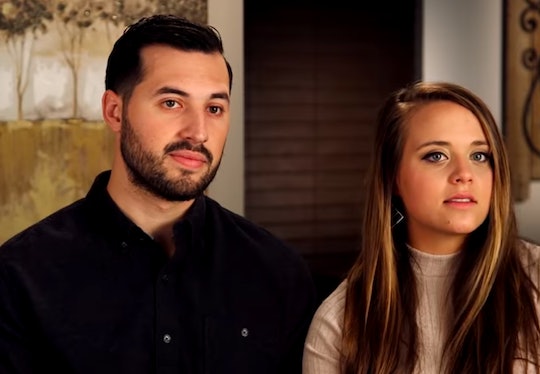 When It Comes To Breastfeeding, Jinger Duggar Has Followed In Her Sisters' Footsteps

With 19 children together, Michelle and Jim Duggar certainly aren't strangers to raising babies. But now that their babies are raising babies of their own, it's interesting to see how their parenting styles differ and remain the same. One thing that seems to remain a constant is breastfeeding, especially for one of the newest Duggar moms on the block. So did Jinger Duggar breastfeed her daughter Felicity? Though she doesn't talk about it often, it looks like she's following in her sisters' experienced footsteps.

Jinger Duggar and her husband Jeremy Vuolo welcomed their first child, daughter Felicity, in July of last year, according to People. And ever since then, the 19 Kids and Counting alum has been flooding her Instagram with adorable pics of her baby girl.

Thanks to a few tidbits from their reality show, Counting On, it seems safe to assume that Jinger has breastfed Felicity in the past, though it's not clear if she's still nursing her daughter today. In a clip from a February episode of Counting On, the new mom wonders if Felicity is fussy due to something she ate, presumably before breastfeeding. At one point in the clip, Jinger tells her husband as she holds Felicity, "I don't know. I mean I could have had something, I could have ate something?"

Then in a sit-down interview, Jinger tells the camera, "This newborn stage is really a guessing game. I never know if she's hungry or tired or if it's something I ate."

While every baby is different some moms have reported that diet plays a role in whether or not the baby is fussy or gassy, according to Kids Health of the Nemours Foundation. Some have found that eating beans, cauliflower, broccoli, or spicy foods can cause a change in a baby's overall mood. If this happens, experts from Kids Health recommend keeping a food journal, so you can pinpoint what the culprit might be.

Another reason to suspect she's breastfed? A recent Instagram photo of Felicity holding a coffee cup read, "Don't worry mom, it's only decaf." While some fans wondered if this was a subtle hint at another pregnancy, most reasoned that the decaf coffee was better for breastfeeding. According to Baby Center, caffeine can go into breast milk, and if you have a fussy baby who just doesn't want to sleep, caffeine likely won't help the situation.

The Duggars take a pretty hard stance on lots of issues, such as how to dress, premarital sex, birth control, and more. But, for the most part, they seem to be in charge of their own day-to-day parenting choices — and that seems to go for their views on breastfeeding, too.

If anything, Jinger has some strong breastfeeding role models in her sisters and her own mom. Mama Duggar, Michelle, was a proponent of on-demand breastfeeding. In a clip from 18 Kids & Counting (before Josie was born), she talks about feeding her then infant Jordan. "I kind of just nurse my babies all the time," Michelle says in the clip. "If she starts to wake up, I usually feed her ... I feel like I'm cherishing the moments I have with her, because she's not going to be nursing for very long."

Joy-Anna Duggar also breastfed her son Gideon until he was well over 6 months old, according to In Touch Weekly, but still received flack from mom-shamers when she posted a photo of him drinking from a bottle.

Life in the public eye can hard, especially when you are a new mom. Everyone and anyone will give you advice, but the only things you should trust are your own instincts and those you love. And thankfully Jinger has a supportive family in her corner.