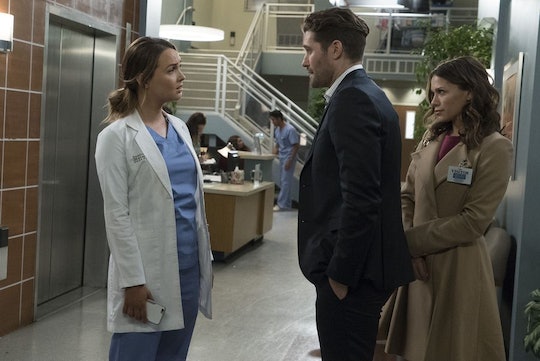 Jo & Alex's Troubles Are Only Just Beginning On 'Grey's Anatomy'

At the end of last week's episode of Grey's Anatomy, Jo's now ex-husband, Paul Stadler, returned to the hospital on a gurney. It turns out Paul was hit by a car and there are two very likely suspects. So did Jo and Alex hit Paul on Grey's Anatomy? They certainly seem like the ideal choice.

Jo and Alex have every reason to want Paul dead. Jo even said as much in last week's episode. Although fans haven't learned too much about Jo's past just yet, it is known that Jo was living in her car for a while before Paul (her teacher at the time) "rescued" her. The pair got married and Jo did love him, until he became physically abusive, hitting her whenever she made a small mistake or did something he felt was embarrassing. In one particular incident, Paul kicked Jo in the back so hard he broke her ribs and almost ruptured her kidney after he read Jo's email and saw the name of a man he didn't recognize. That was when Jo finally found the courage to leave and she ran away, changing her name and starting over as Jo Wilson.

Since then, Jo has had to live in fear that Paul would someday find her. Additionally, she couldn't marry Alex because she was still married to Paul. Although she found the courage to pursue her divorce and even face Paul in person, when he threatened her at the end of last week's episode, she realized she would never truly feel safe and that's when she said she wished he was dead out loud. But does that mean she and Alex really tried to kill him? My guess is, probably not.

Alex has already learned the hard way what it feels like to face just the possibility of real jail time, so it's probably safe to say he never wants to go through that ever again. Plus, from a plot stand point, why would Grey's repeat that storyline so soon? It doesn't add up. Moreover, Jo wouldn't have gone along with it. Yes, she was the one who said she wished Paul was dead, but she didn't mean she wanted to be the one to kill him. She just meant she wished she didn't have to worry about him ever coming after her, which is totally fair.

Plus, neither Alex or Jo are stupid. They know full well if they did try to kill Paul they would be the primary suspects. Therefore, if they did hit Paul why would they a.) act so calm and casual before Paul was wheeled in, and b.) stand right in front of where Paul was being taken care of? That would be poor strategy on their part, and I'd assume they didn't get their medical degrees by lacking common sense. Not to mention they seemed legit surprised to find him on the gurney.

Thus, Alex and Jo are just the red herrings, and there's no way they did it. Which begs the question, who did? Paul's new fiancée, Jenny, is an obvious choice. Jo attempted to warn her about how dangerous Paul is and unfortunately Jenny then told Paul everything. Even so, that doesn't mean Jenny didn't take Jo's words to heart. If Jenny was being abused by Paul, it wouldn't be surprising if she told on Jo in an effort to safeguard herself, in case Paul somehow found out about it later.

So perhaps Paul tried to hurt Jenny, she wasn't having it, and then she ran him over with their car. It definitely sounds a bit more plausible than Alex and Jo having done it. Thankfully, fans won't have to wait much longer to get to the truth. An all-new episode of Grey's Anatomy airs Thursday, Jan. 25 on ABC at 8 p.m. EST.