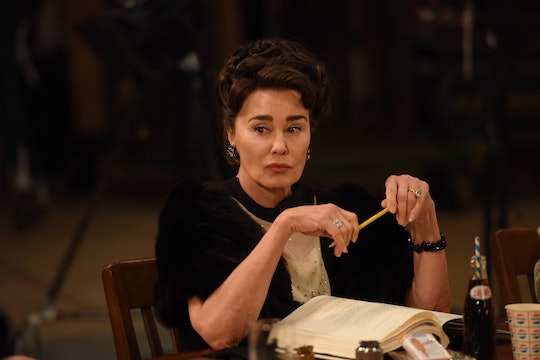 Joan Crawford Made A Power Play On 'Feud'

After all the tension on the set of 1962's What Ever Happened to Baby Jane? it seemed impossible that Bette Davis and Joan Crawford would ever choose to team up on screen again. Yet they did, in 1964 for Hush... Hush, Sweet Charlotte, and the atmosphere on set was even worse than it had been the first time. Their relationship was at its lowest point and their time together on Sweet Charlotte only exacerbated things. Feud explored those rising anxieties, which culminated with one of them deciding to hold up production by checking herself into the hospital. But did Joan Crawford really fake being sick for Sweet Charlotte?

That is the commonly accepted explanation for her leaving the film, though different motives have been assigned to her fake illness over the years. Many assumed (Feud included) that she was faking sick as a power play. By holding up the movie, she could leverage her return to force Aldrich to make changes in the production: she would come back if they did what she wanted. Others think the stress caused by the animosity between her and Davis was simply too much, and playing sick was a way for Joan to bow out of the production gracefully without looking bad. No one could call her a diva if she were sick, right? But some have said what started out as a power play turned into the real thing, as Crawford became convinced she was sick even though there was nothing wrong with her.

Whatever her reasons for doing so, it did not appear that Crawford was actually sick; at least, doctors couldn't seem to find anything wrong with her despite the lengthy stay at the hospital. If she was trying to bow out of the film with her image intact, then she pretty much got exactly what she wanted, though her career never quite recovered. If she was just trying to assert some power in the film, then the whole enterprise was a major fail.

As in Feud, Crawford did return to set eventually, but none of her desired changes were made. Her return was also short-lived. She could put an end to filming for the day whenever she wanted if she felt an attack of breathlessness coming on, which delayed the film and cost the studio money. The show presented Crawford as wanting to shut down production entirely out of vindictiveness, but it's difficult to say if that was also the real Crawford's intention.

Faking sick was also common practice for Crawford, who did the same thing in 1945 when she won her Oscar for Mildred Pierce. Afraid that she wouldn't win, she stayed home and accepted the Oscar from her bed (which, honestly, is a boss move). But while playing sick had worked out beautifully for Crawford once, it didn't do the job the second time.