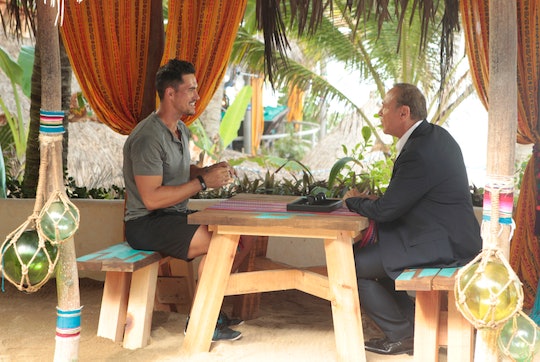 Did Josh Pay For Amanda's Ring On 'Bachelor In Paradise'? It's Technically On Loan

Bachelor in Paradise wraps up Season 3 with the heavily foreshadowed multiple proposals! and among the couples who walk off into the sunset together are Josh Murray and Amanda Stanton. Like the three other guys in the finale, Josh takes a meeting with Neil Lane, official jeweler of the Bachelor franchise, who comes armed with an arsenal of engagement rings for the guys to choose from for their final rose ceremony. Josh picks out one very special sparkler from the bunch for Amanda, but does Josh pay for Amanda's ring on Bachelor in Paradise? Technically, no. Here's how the engagement ring leasing process works across all shows of the Bachelor franchise.

Neil Lane brings a few for the guy or guys who are proposing to choose from, and essentially "donates" them to the cause in exchange for the publicity. (And considering he's been the go-to guy for over 20 seasons, it's not a shabby marketing move.) ABC technically "owns" the ring for two years after the final episode of the season airs. If the couple is still together after that two years is up, then they get to keep the ring, free of charge, and Lane has officially "donated" it. If they break up in that two years, ABC takes the ring back and returns it to Lane. The guy never pays any money, and, considering how few Bachelor couples wind up staying together for the long haul, Lane actually gets a pretty good return rate on his investment.

While Josh didn't and won't ever pay for the ring he gives to Amanda (even if they wind up returning it after a breakup), it is a little less lavish than The Bachelor/Bachelorette rings. Bachelor in Paradise has a reported smaller budget than its predecessors, so those rings typically fall in the $60,000-$90,000 range, while Bachelor/Bachelorette rings are usually worth upwards of $100,000.

Josh picks out the ring with Neil Lane's help, of course, but he and Amanda did discuss preferences beforehand — thanks to one of the show's producers!

"We did talk about the ring," Josh told Entertainment Tonight in an interview. "One of our producers, Todd, his wife has a beautiful ring that [Amanda] loves: more oval-shaped, lots of diamonds of course."

It looks like Josh used that inspiration to pick out a cushion cut center diamond with a French-set halo around it, or so we can surmise from screenshots of the ring in the finale's sneak peek. We'll have to wait until September 6th, 2018, though, to know if Amanda gets to keep it.