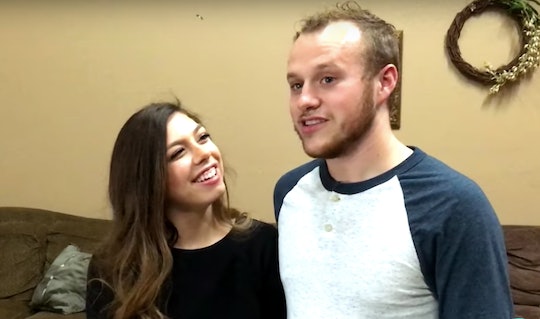 Here's What You Need To Know About Josiah Duggar's Education Path

Fans of the ever-expanding Duggar family are currently fascinated with one particular son, Josiah, who recently announced his engagement to Lauren Swanson. Both Duggar, age 21, and Swanson, age 18, are still pretty young, and some people are wondering, did Josiah Duggar go to college? The Duggar family is extremely strict and conservative, and they follow a homeschooling program, so a Duggar kid going to a traditional university is unlikely.

It seems that, in accordance with his parents' beliefs, Josiah didn't go to college, at least not in the way that most people think of it. In a 2011 post on the Duggar Family Blog, family matriarch Michelle Duggar said that "life is a classroom," while father Jim Bob Duggar sang the praises of an online college program called College Plus, which is described as providing "personalized higher education solutions for homeschool families" on Homeschool.com. In 2012, Michelle wrote on the TLC website that some of her children were taking courses and intending to get their degrees that way. Meanwhile, The Inquisitr reported back in 2016 that Josiah's younger brother Joseph was the first kid in the Duggar family to attend a brick and mortar school. According to the article, Joseph reportedly attended The Crown College of the Bible in Powell, Tennessee, but left after one year and began working in his father's real estate business.

Meanwhile, there's no mention of college on Josiah's Instagram account. The closest he gets to talking about an educational program is his mention of a program called Alert Academy, which he attended at the age when kids traditionally go to college.

On its website, Alert Academy describes itself as "a unique Christian training and service organization whose mission is to equip individuals with the tools to prepare them for the specific callings God has placed on their lives." It offers a multi-month program for young men, but it's definitely not a university.

Back in 2017, Josiah posted a picture of his time there, writing:

Going through ALERT Unit 51 in 2014 was one of the best experiences I've had. Looking back, the most important lessons I learned there were how to make the most of every moment, and to be ready for whatever opportunities God places in front of me next! Unit 58 is coming up soon! I'd encourage any young man 17+ who's up to the challenge to check it out!

Michelle has spoken highly of the benefits of homeschooling her children, writing that it promotes "a closeness between the parents and the children - a real, genuine love and respect for one another." But the Duggar homeschooling program has also come under fire. Now-defunct media company, Gawker, published an article back in 2015 claiming that the curriculum the Duggars allegedly used contained some very troubling lessons on sexual abuse. (Gawker called the lessons "frighteningly light on personal responsibility, and heavy on blame for the victim.")

And once they've completed their homeschooling curriculum, the Duggar kids seem to focus more on the church, courting, and having children instead of trying out a university.

For anyone who doesn't know, "courting" is the way that Duggar children find their future wives or husbands. The parents have very strict rules about courting. According to TODAY, courting couples are not allowed to kiss or even hold hands, and their dates are chaperoned. It's not surprising, then, that many Duggar children have been eager to marry. Josiah and Swanson announced their engagement only six weeks after they announced that they were courting. The young couple seems thrilled about their future together.

While college obviously isn't for everyone, it doesn't seem like it's a legitimate option the Duggar children. Only time will tell if Josiah and his soon-to-be wife will follow the same path.

More Like This
Alex Guaranschelli Is A Renowned Chef, But Her Daughter Still Gets Recipe Inspo From TikTok
Jennifer Lopez Says Blending Families With Ben Affleck Has Been An “Emotional Transition”
Prince Harry Says He’s Worried One Of Prince William’s Kids Will End Up As “The Spare”
Julia Fox’s Apartment Tour Is Peak Mom Realness
What Parents Are Talking About — Delivered Straight To Your Inbox