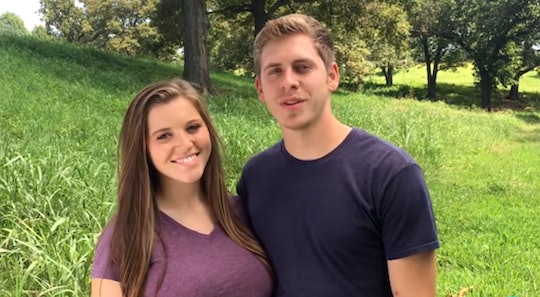 Did Joy-Anna Duggar Have A Hospital Birth? Here's What We Know

Reality TV's biggest family just got even bigger. Joy-Anna and Austin Forsyth announced Gideon Martyn Forsyth's birth on Monday, but a now-deleted Instagram post by cousin Amy King has fans asking, did Joy-Anna Duggar give birth in a hospital? For most first-time moms, it's the obvious choice, but in her family, the recent trend has been to give birth at home. King's photo was only up briefly before she deleted it and switched her account to private, leading some to speculate that Joy-Anna could be ashamed of her labor venue. Let's hope not, because there's absolutely nothing wrong with taking advantage of modern medicine.

While the photo clearly shows Joy-Anna and Austin at the hospital — as well as a blanket-draped lump we can confidently assume is Gideon — that doesn't necessarily mean that she gave birth there. Her sister, Jessa Seewald's first child was born at home, but she still ended up in the hospital afterwards. Seewald was ready to check in and get an epidural after 10 hours of contractions, she told People, but after everyone questioned her choice, she agreed to hang in there, and gave birth to a 9-pound, 11-ounce boy after 40 hours of labor. She then began hemorrhaging, and had to be rushed to the hospital for a blood transfusion, and her son joined her for an overnight stay.

Not all Duggar kids are born at home, though, because sometimes that's just not possible. Older sister Jill Dillard, champion of the home birth, has had two births in the hospital herself, despite being a midwife. Her first labor lasted for an incredible 70 hours after her water broke, according to US Weekly, and she only agreed to enlist the help of medical professionals when she discovered meconium in the amniotic fluid, a dangerous condition that put her baby at risk for infection or aspiration, according to the U.S. National Library of Medicine. Once she arrived at the hospital, doctors discovered that the baby was breech, and she had to undergo an emergency C-section. Dillard's second child was also born via emergency C-section after she labored for 40 hours at home, according to People, but the family hasn't shared any details on the complications that led up to it.

Home births are a relatively new trend with family, and not, as many assume, a requirement of their religion, according to a 2009 book by Joy-Anna's parents, Jim Bob and Michelle. In The Duggars: 20 and Counting!: Raising One of America's Largest Families—How They Do It (yes, even that title is enormous), the couple wrote that Michelle had her first five children at the hospital before a friend suggested she try home births. The sixth and seventh Duggar kids were born at home, but a doctor and nurse attended both births. Michelle chose to go back to the hospital for her eighth birth, and every one thereafter.

Still, Joy-Anna did want to give home birth a whirl, but she knew that it might not work out. In a TLC online video, she and Austin shared that they had set up a birth pool in anticipation of Gideon's arrival, but the women who'd gone before her told her what to expect.

The advice I've gotten so far is just to be flexible, I think, and prepare for the birth and have plans, but if something doesn't go as planned, then be OK with that and just have another plan.

What she might not have planned on is pushing out a 10-pound, 3-ounce, 22-inch long baby just 39 weeks after getting married. That, if you didn't realize, is one huge baby! Whether a feat like that required a C-section, medication, or just a couple extra hands to pull him out, there's no shame in that. Joy-Anna and Gideon are both reportedly healthy, so however she chose to give birth, it seems to have worked out just fine.