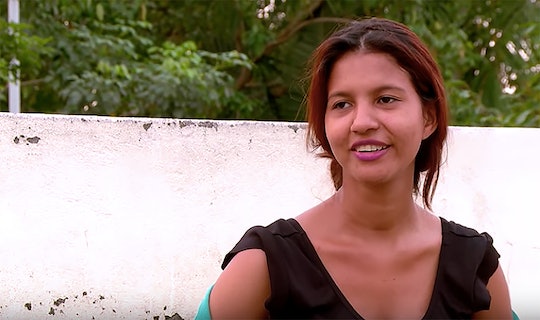 Back in October 2018, Karine from 90 Day Fiancé announced her third pregnancy. The happy news came after she and her husband, Paul, weathered two miscarriages together. And now, in the ninth month of her baby journey, fans are anxious to know whether Karine gave birth. By the looks of it, the reality star kicked off the start of spring with a special delivery.

Karine and Paul welcomed their son, Pierre Martins Staehle, on Friday, March 22nd, according to Us Weekly. The little guy was born in Karine's native home of Brazil, which is an especially sweet detail.

Paul confirmed the news Monday, telling Us Weekly: “I’m very happy, very excited. I’m also very nervous and want to do everything the best that I can and do everything right."

He added: "Everyone keeps asking how it feels to be a dad. Anyone can make a baby, but going through the day-to-day process of being a father is going to be a new experience. I’m very happy, very honored and very privileged and I want to make sure I do my absolute best for Pierre.”

Relatable, right? Many parents worry about not living up to their own expectations.

As for Karine, she's doing just fine despite a tough delivery.

"I am fine, and happy, even with the hard time I have had," she added. "And I am recovering well, but I am still very weak. It was super hard, but now everything is fine because the baby is calm and he is breastfeeding well."

"Only one person is allowed to be with her. Her mother is by her side,” Paul wrote in his post. “She was in severe pain as of Thursday. Labor took much longer than expected. Karine was given absolutely no pain medications. Even when they performed an episiotomy.”

The new dad also revealed that Pierre is recovering from jaundice, a condition that causes "yellow discoloration of a newborn baby's skin and eyes," according to the Mayo Clinic.

“Pierre, unfortunately, is still hospitalized and is receiving treatment for jaundice,” he explained, according to In Touch Weekly. “We are not sure how long Karine Staehle will be hospitalized with Pierre. She is healing well.”

There's a good chance Pierre's birth will be shown in the next season of 90 Day Fiancé. Karine and Paul were photographed at the hospital with a camera crew, and it makes sense for TLC to cover this part of their love story.

In the meantime, curious fans can check Paul's Instagram and Facebook accounts (Karine's IG is private) for updates about baby Pierre. Congrats to the new parents!