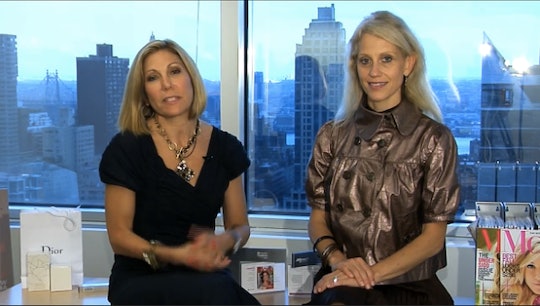 In the video, Seymour introduces Clinton, calling her "that great woman who I believe we just saw a poll that said she's the most admired woman in the country if not in the world." She then asks Conway: "What do you think's gonna happen, is she gonna run for president at some point?" To which Conway responds: "Well, not of this country." Conway then launches into an analysis of Clinton and her role during President Obama's first term:

I think that one of the best things that ever happened to Hillary Clinton is that she did not win the 2008 primary election against President Obama. I don't know if it's the best thing that happened for the country, frankly, there are many people who not only have buyer's remorse about President Obama but...also are sort of nostalgically wondering aloud 'what if, if only' Mrs. Clinton, Sen. Clinton had been elected. But she went ahead and did something pretty gracious and pretty powerful at the same time, she became the Secretary of State for the man who beat her for the nomination.

Conway then pits Clinton as a "gracious" acceptor of Obama's offer while criticizing Obama's presidency. She goes so far as to say that if Clinton ran against Obama's reelection, "she would cream 'im," though "[Clinton's] a loyalist if nothing else." This runs in contrast to the very recent tweet below that praises Obama and insults Clinton: ‌

Conway's positive, 2011 remarks went a bit further, saying: "[Clinton's] stock has gone up. She’s about as popular as her husband now which she never was." Conway predicted that Clinton's next moves would include "grandmotherhood" and some personal activism on women's issues, calling Clinton's dedication to civil service "pretty compelling." Though technically Clinton is now a grandmother, she has by no means slowed down politically.

In previous statements about Clinton, Conway appears less impressed by Clinton's character. In 2004, Conway told CNN that Clinton "wasn't popular until her husband treated her like a doormat." In April 2005, she fixated again on the infidelity, asking MSNBC: "Hillary Clinton could not stand up to a cheating husband, so how in the world would she stand up to North Korea and some of our other enemies around the globe?”

Conway's conservative influence stems from her work with well-established Republicans such as former House Speaker Newt Gingrich, Texas Sen. Ted Cruz, and Indiana Gov. and Trump's running-mate, Mike Pence. Running her own polling firm, The Polling Company/WomanTrend, Conway has been a key voice speaking from and to conservative women. In speaking of Clinton after this year's Republican National Convention, Conway told TIME that Clinton's lead among women wasn't larger "because women say, ‘You share my gender, that’s really fascinating, that’s kind of cool, but do you share my vision, do you share my values?"

If nothing else, it seems the two powerful, female political figures, Conway and Clinton, did at some point share values—those values being grace and loyalty.