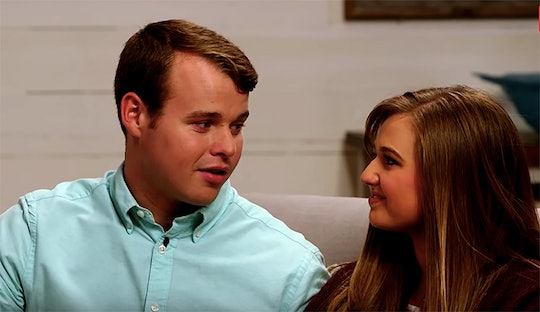 Fans Think Kendra Caldwell May Have Dated Another Duggar Before Joe, & It's A *Wild* Rumor

Following a brief courtship (I'm talking four months, people), Joseph Duggar and Kendra Caldwell tied the knot in a September 2017 ceremony. And not too long after the nuptials, Joseph and Caldwell announced in December 2017 that they're expecting their first child. Sounds like a typical Duggar relationship, right? The pair's union literally mirrors every other Duggar relationship, after all. As it turns out, however, there might be more to the couple's story than meets the eye — and some people think Caldwell dated Joseph's younger brother, Jedidiah Duggar, aka Jed, before the two got together. So, did Kendra Caldwell date Jed Duggar? Although the answer isn't necessarily clear, one thing is for certain: Counting On fans are seriously confused about this peculiar rumor.

Out all of the Duggar rumors out there, the idea that Caldwell dated Jed before Joseph might be the most outlandish one. I mean, it's pretty unrealistic that Jim Bob Duggar would allow Joseph to put the moves on his younger brother's girlfriend, right? But as wild as this gossip might be, it doesn't prevent people from discussing it in length. Case in point: On Wednesday night, a fan in the Reddit Counting On forum started a discussion titled, "Kendra Courted Jed Before Joe?" The original poster said about the rumor's likelihood, writing, "I know, I know... don't believe everything you read/hear on the internet. This is juicy if it's true... what do you think?"

So, what is the commenter referring to here? What evidence is out there to suggest that Caldwell and Jed were ever in a courtship? Well, it looks like this rumor hinges entirely on an interview with a supposed ex-employee of the Duggars. Per the insider, a then 22-year-old Joseph "bumped" a then 18-year-old Jed "out" of Caldwell's life during the early stages of their courtship, according to InTouch Weekly. Following a brief feud (which would be understandable if the rumor is true), Jed supposedly wrote Joseph a letter giving him his blessing to date Caldwell.

Although this drama might sound fishy, the insider claims these Duggar shenanigans are more common than you might think. "There's a whole world that goes on that really isn't so," the source said of the surprising behind-the-scenes antics at chateau Duggar, according to Cafe Mom. "When the cameras aren't rolling, it's a whole different life." It's important to note that this is a *huge* unsubstantiated claim from an unnamed source. Right now, these rumors are just that — rumors.

Still, the whole thing is confusing. For instance, what was Caldwell's involvement in all of this? I find it a bit odd — and even troubling — that Caldwell's feelings weren't mentioned in this interview. It goes without saying that a person should get to choose who they'd like to date — or in this case — court.

One fan said of Caldwell's possible involvement in this scenario, according to Reddit:

This idea has been around for a while and maybe they started to have a special friendship at one point but I honestly think it's common place for someone like her to get passed around a bit to find the right guy. Their families are friends and her father and JB had probably decided that that wanted her to marry a duggar so she probably got to know any suitable brothers.

Ugh. One can only hope Kendra wasn't "passed around" the Duggar family.

Another fan had *questions* about this rumor. "Very awkward, if true," the person said. "Was there parental interference on either or both sides? ... Perhaps a case of Joe convincing Jed that he and Kendra were a better match, and Jed the gentleman stepped aside? ... Wish a worker could go into that house so they could slap a (microphone) bug in there!"

Hmm. I'm not sure if the world is ready — or will ever be ready — for a filter-free version of the Duggars. Perhaps fans should refrain from bugging the Duggar compound for now.

Whether the rumor is true or not, it's clear Caldwell and Joseph are very happy in this present moment. So, while this gossip is interesting, fans should probably give the speculation a rest because Caldwell and Joseph have clearly moved on. And, needless to say, the couple deserves to enjoy married life in peace.