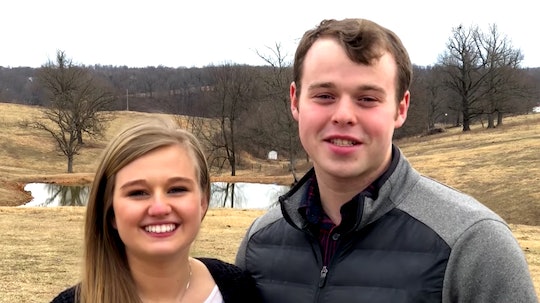 Michelle and Jim Bob Duggar first catapulted their family into reality stardom not only for the sheer number of children they had, but also for the way they chose to raise them. Viewers learned from TLC's 19 Kids & Counting that the Duggars' extremely conservative Christian values called for modest clothing, homeschooling, chaperoned courtships, and strict gender roles, among other unconventional family rules. As their adult children married off and began families of their own, another trend emerged: Opting for home births with a midwife instead of hospital births. So far, nearly every Duggar daughter has chosen to at least attempt a home birth, even if it didn't necessary end up that way. But what about one of the family's newest in-laws? Did Kendra Duggar give birth in a hospital? Her birth special revealed a break from Duggar tradition.

Kendra and Joseph Duggar welcomed a baby boy — whom they named Garrett David Duggar — on June 8, according to TLC. However, it wasn't until several weeks later that fans got a closer look at the little one's birth story. It soon became quite clear that the expectant parents wanted a hospital birth all along, as In Touch Weekly reported.

During part one of the two-part special, Kendra, Joseph, her mother, and her sister were all at the Duggars' home helping the mom-to-be time contractions during early labor. Viewers also learned that Kendra had been having pre-labor contractions for a couple of days already. At around 2 a.m., on June 8, they decided her contractions were strong enough (and close enough together) that it was time to make the 25-minute drive to the hospital.

Part two of the TLC birth special featured Kendra laboring at the hospital, with contractions slowing briefly, and then eventually ramping up for "go time." It wasn't long after a doctor broke her water that they start hitting strong and fast — and although no one directly addressed it during the special, it appears as if Kendra chose not to have any pain medication.

With the support and coaching of her husband, mom, and sister (who often reminded her to breathe because she has a history of holding her breath and passing out during painful situations), Kendra delivered a healthy baby boy in a hospital setting. Fans got their first glimpse of their baby boy through a TLC video — from their hospital room — introducing baby Garrett on June 22.

Of course, Kendra isn't the first Duggar of this generation to wind up giving birth in a hospital; she's simply the first to seemingly have planned it that way. Immediately after Joseph's older sister, Jessa Seewald, gave birth to her first child, Spurgeon, at home on Nov. 5, 2015, heavy bleeding required a trip to the hospital, according to People. Ultimately, Jessa required a blood transfusion and an overnight stay, as People reported.

And both times Jill Dillard has given birth, she's ended up at a hospital delivering via emergency C-section, according to People.

The same goes for Joy-Anna Forsyth, who welcomed a baby boy named Gideon in January via C-section, according to TODAY, following 20 hours of laboring at home without progress.

In typical Duggar fashion, Joseph and Kendra had a whirlwind romance. They started courting in March, got engaged in May, and then tied the knot in September 2017. After that, they didn't waste any time starting a family. The newlyweds announced they were expecting their first child back in December, People reported.

“I’ve always dreamed of having my own family and it’s really just kind of surreal that it’s actually here,” Joseph said in the clip. “I kind of think it’s going to be a boy, but either way, I’m happy just to have a baby.” To which Kendra added, “I think it could be a girl. You never know!”

A couple months later, Kendra and Joseph revealed they would be having a baby boy, Us Weekly reported.

Because all of her sisters-in-law have expressed a desire for home births, I would imagine Kendra might have considered it as well. But clearly, the first-time mom was more comfortable with delivering in a hospital setting, and that's perfectly fine. I'm glad that Kendra and Joseph got the birth experience they had hoped for — and I wish them the best as they begin this next chapter of life together: Parenthood!