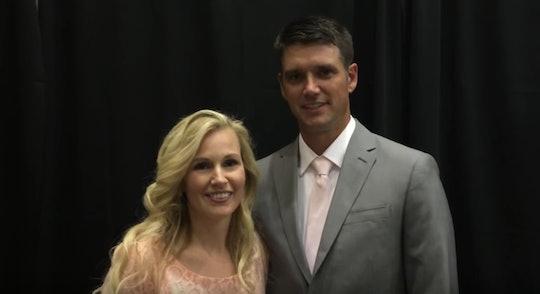 Kendra Duggar & Her Mom Were Pregnant At The Same Time, So Is Mama Caldwell's Baby Here Yet?

When Counting On fans were first introduced to Kendra Caldwell, her upbringing was pretty similar to that of other Duggar partners before her: She had similar Baptist beliefs and came from a large family. Granted, Kendra's six siblings don't even come close to Michelle and Jim Bob Duggar's 19 children. (But still.) Something else that fans noticed right away was how young Kendra's parents seemed — and they're young enough to still be having babies of their own, it seems. But did Kendra Duggar's mom have her baby? As you might recall, she and her mom were pregnant at the same time.

Part of the reason Paul and Christina Caldwell look so young is they are fairly young to have a 20-year-old daughter and a grandson. According to In Touch Weekly, Christina was reportedly born in 1980 and Paul was born in 1978, which means they became grandparents in their late 30s/early 40s. That might sound impossibly young by today's standards, since a good portion of couples are waiting later in life to start families, according to The New York Times. But it isn't too surprising, considering they got married in 1998 — when Christina was 18 and Paul was 20 — and then had Kendra right away. Because Paul and Christina are still in their "childbearing years," it wasn't a total shocker when Kendra revealed in her recent birth special that her mom was also expecting.

The two-part birth special — which premiered on June 29 — begins with Kendra having contractions during the early stages of laboring at home. Both her mom and her sister, Lauren, were at Kendra and Joe's house helping Kendra time and breathe through her contractions. (Apparently, Kendra has a history of holding her breath and passing out if she's in a lot of pain.) "I'm so thankful to have my mom," Kendra tells the camera. "She knows all about the breathing and just how to get through the labor. She's done it several times." And several times she has. According to In Touch Weekly, Kendra is actually one of seven siblings — Lauren, Micah, Nathan, Timothy, Olivia, and Jesiah — and soon to be one of eight! During the TLC birth special, Kendra continued:

We found out my mom was expecting about a month ago. I think this has definitely been really interesting because we've been able to share a lot of things we didn't get to share before. So I feel like we've become even more like friends, and I guess our relationship has just gone to a different level, I guess.

Clearly, being pregnant at the same time brought Kendra and her mom closer together. It'll be so sweet for Kendra's new sibling and her own son, Garrett, to grow up together. Rather than a typical aunt/nephew or uncle/nephew relationship, though, I'm sure the little ones will grow up more like cousins — kind of like Josh and Anna Duggar's older children and Michelle and Jim Bob Duggar's youngest.

But getting back to the original question: Has Kendra's mom had her baby yet? Let's crunch the numbers, shall we?

As People reported, Kendra delivered a son named Garrett David Duggar on June 8. During the birth special, Kendra mentioned that her mom found out about a month ago that she was also pregnant. So let's just say Christina was six weeks along when she got that positive pregnancy test. (Which is actually on the early-ish end of the spectrum, from my experience). Let's add four weeks to that, since Kendra said it had been "about a month." (So that would have made Christina about 10 weeks along at the time Kendra gave birth.) Taking into account it's been about 11 weeks since Kendra delivered baby Garrett, that means Christina would be roughly 21 weeks along now — or just around the halfway point of pregnancy.

Then again, Kendra's mom might have waited a while to spill her own baby news. She might have also found out she was pregnant before six weeks. It's hard to tell, for sure.

In conclusion, it's impossible to say how for along Kendra's mom would be at this point. But it's probably a pretty safe bet to assume that she hasn't given birth yet. Considering Christina Caldwell isn't a regular on the TLC series, I'm not sure if fans will necessarily get an update until Kendra's new sibling is actually born. I guess followers will just have to keep tuning into Counting On to find out!