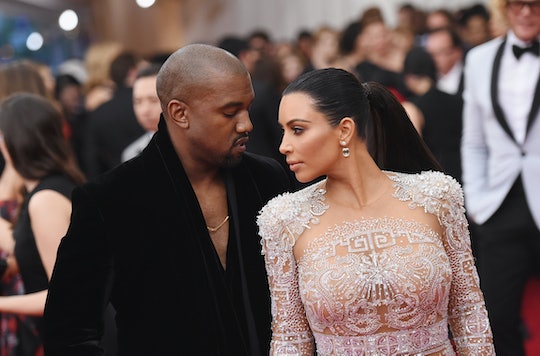 On Monday, May 6, the world rejoiced as news of the arrival of Baby Sussex was announced via social media. Another royal baby! As it turns out, Meghan Markle and Prince Harry welcomed a healthy baby boy. Fans are still waiting to find out the newest royal's name is — and in the meantime, rumors that another "royal" family had welcomed a child started spreading like wildfire: Kim Kardashian and Kanye West. But did Kim Kardashian's surrogate actually give birth to the couple's fourth child? Don't worry, the KUWTK star quickly addressed the rumors.

It all started on Monday when the soon-to-be mom of four shared a screenshot of a text exchange via her Instagram Story, as Us Weekly reported. The message was from her husband and it read, “This is your life. Married with four kids, get people out of jail, cover of Vogue, go to church every week with your family. Dreams come true.”

Eagle-eyed followers quickly honed in on the whole "four kids" bit. Wait, what?! Does this mean Kimye's surrogate already delivered their baby boy? Is this some sort of low-key birth announcement? What is going on?!

Not long afterward, Kardashian took to Twitter to clear up the confusion. "Wait just saw news our baby boy came but that’s not true!," she tweeted. "It’s Met Monday, I’m in NYC. I would be at the hospital lol," she tweeted Monday afternoon, just hours before she was expected on the red carpet.

Last month, Kardashian told The New York Times her fourth child is due in May. Considering it's officially the second week of May, that means baby number four could be coming any day not. So it's not surprising that KUWTK fans are hawking over every single social media post and jumping to premature conclusions. Still... Kardashian has always shared the birth of her children in a big and timely manner. So I have a feeling it will be completely obvious once their baby boy does make his big arrival.

Although Kardashian has had more time to get used to the idea at this point, news of her surrogate's pregnancy initially shocked the KKW Beauty mogul. “I’m low-key freaking out,” Kardashian told Kylie Jenner during the Season 16 KUWTK premiere. “I didn’t think it was going to happen. I thought like ‘oh, it probably won’t even take.'” But take, it did! Kardashian confirmed in January that she and West would be adding a baby boy to their family, according to USA Today.

Kardashian opened up with Entertainment Tonight in April about her second experience with using a surrogate — and how it compares to her experience with Chicago. "It's a different experience for sure, this situation is different," she told Entertainment Tonight. "I love my surrogate, we have a really good relationship. I really trust her and I definitely see, like, the first time that I went through it, I was a little bit more anxious, and texting more and calling more, and I feel like my surrogate this time around, really is such a protecting person and I really trust that in her." She continued:

So, I feel really calm and at ease. I don't know if it's a fourth kid thing or, we've been through the surrogacy before, you just get a little bit more calm as they go.

As Kim Kardashian's surrogate enters into the final stretch of this pregnancy, I'm sure the reality star and her family are growing more anxious and excited to meet their little one. (I know I can't wait to see his sweet little face.) But maybe we should all take a deep breath and just let it happen. Because let's face it: Reading too far into every single social media post until the big day arrives is just going to drag it out even more.