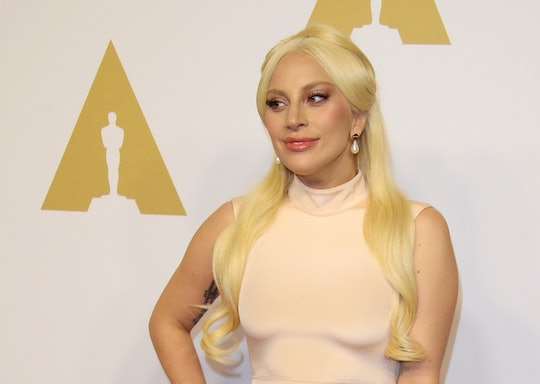 Did Lady Gaga Meet David Bowie? Her Grammys Tribute To Him Should Be Incredible

Lady Gaga will pay tribute to legendary musician David Bowie at the 58th Annual Grammy Awards on Monday, the New York Times reported. Gaga had already been scheduled to perform when Bowie died last month. According to the Times, the show’s producer quickly turned to the Fame Monster singer and star of American Horror Story: Hotel as the perfect artist to pay tribute to Bowie’s accomplishments. After his death, many shared Gaga's tribute to the music legend. She spoke about him as if she knew him, but did Lady Gaga meet David Bowie? He inspired her, but it's unclear if they ever actually met.

Recognizing Bowie’s prolific music career and generational influence only made sense for the Grammys organizers. Bowie earned 11 Grammy nominations over his career, and in 2006 he was honored with a Grammy Lifetime Achievement Award, according to Newsweek. The legendary singer and songwriter died on Jan. 10 after an 18-month battle with cancer.

With his death, many in the music industry wondered how the awards show would pay tribute to his career and influence, according to the Times. Ken Ehrlich, longtime Grammy producer, told the Times that he was contacted by several artists interested in participating, but he didn’t feel any of them was quite right for the segment — except for Lady Gaga.

Gaga was one of many artists who stepped forward after Bowie’s death to talk about how his work influenced their craft. The story Gaga told in a recent interview with The Hollywood Reporter of her first encounter with the Star Man probably rings true for any Bowie fan:

When I fell in love with David Bowie, when I was living on the Lower East Side, I always felt that his glamor was something he was using to express a message to people that was very healing for their souls. He is a true, true artist and I don't know if I ever went, 'Oh, I'm going to be that way like this,' or if I arrived upon it slowly, realizing it was my calling and that's what drew me to him.

While Gaga spoke fondly of Bowie in her THR interview, it isn’t clear that the two icons ever met in person. Still, she drew a clear line from the imagery and fantasy that inspired Bowie’s work and her own contributions as an artist:

I just know that you can use the theater of your imagination to entertain people beyond their wildest dreams and then you can put something inside of that that changes the world, and that to me is when you make something truly great as an artist. You don't nail it every time. I definitely don't, with all my songs, always hit that note. You try. And every once in a while, the world lights on fire with the music.

Ehrlich told the Times that while Gaga’s performance will not open the 58th Grammy Awards, the singer’s tribute will be a substantial segment within the show, covering “at least three or four” popular Bowie songs. Ehrlich said Gaga’s performance would be “a true homage to who David was,” not just as a music icon but as a cultural influence. Chic legend Nile Rodgers will direct the segment.