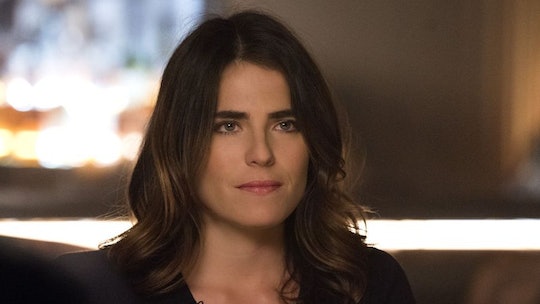 How to Get Away with Murder Season 4 ended the same way the previous three seasons have — with some questions answered and even more unanswered. The least of fans' worries this time was the fate of Laurel’s mom, but after she essentially disappeared, it left fans wondering the obvious; did Laurel murder her mother on HTGAWM? Around the time that Sandrine disappeared, Laurel was reeling over losing custody of her son and the fact that her parents may have been in cahoots with each other to take him away from her.

To be honest, their family drama got a little messy by the end of the season so I’m still not clear if Laurel’s mom was one of the good guys or not, but I don't think she was on her father’s team at least. Laurel did find out that Sandrine had been part of the string of events that led to Wes’s death, so the motive was definitely there. But throughout the episode, Laurel asserted her innocence, and with no body to prove that Sandrine was even dead, everyone was inclined to believe her. She did, however, admit to Annalise that she told her mother to kill herself and later in the episode, Laurel told her father that Sandrine was dead to her. A little slip up perhaps?

The Castillo family in general is hard to get a read on most of the time. For the most part, it's obvious that both of Laurel’s parents are bad news. But her dad seemed sincere when he told Annalise that she didn't understand the things that Laurel is capable of doing. And before that, Dominic told Frank that Laurel was controlling him just as she’d done with the other men in her life. Could there be a side to Laurel that viewers haven’t yet seen? One capable of murder on her own rather than with the rest of her former classmates? Sandrine's last scene in Season 4 was with Laurel, so it is possible that Laurel attacked her out of rage.

After Laurel met with her mom in Wes’s apartment, Sandrine wasn’t seen or heard from again. It’s possible that she actually did commit suicide after being driven to do so by Laurel’s harsh words, but then that doesn't explain the scratches on Laurel’s arms. Although no one else saw them, they could have been defensive wounds from her mother. The two women could have just had a fight, but this is HTGAWM. At the very least, Laurel wanted her mom dead, and the HTGAWM moral compass is pretty sketchy.

HTGAWM creator Pete Nowalk told Entertainment Weekly that the scratches on Laurel’s arm were meant to be one of the big mysterious cliffhangers of the season. So hopefully that means that the mystery of her mother’s disappearance will at least be addressed during Season 5. "All I’ll say is that the scratches are not from a cat," he said. "That’s a mystery. You’re picking up on all our cliffhangers — how the hell did Laurel get these scratches, and where the hell is her mother, and does Laurel know something that she hasn’t told anyone?"

At the beginning of Season 4, Laurel had been relieved to see her mother, especially after dealing with her father. But once it became clear that Sandrine had a prior relationship with Wes and that she’d had something to do with his death, Laurel did a complete 180. I’m not sure if she’s actually capable of killing her mom in a fit of rage, but her mom hasn't resurfaced yet.