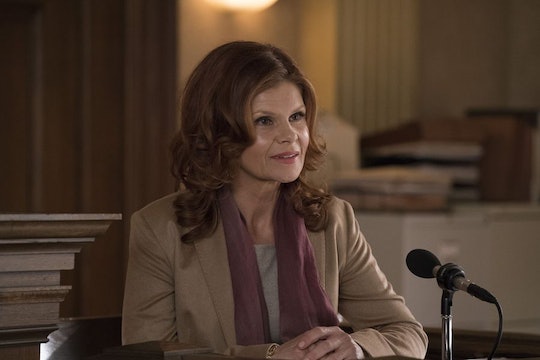 Although it seems like we've been trying to figure out who killed Wes for years now, How to Get Away With Murder fans still don't really know the truth. At the end of the How to Get Away With Scandal crossover event, Frank discovered a USB with a video that proved Laurel's mom met with Wes prior to his death, which begs the question: did Laurel's mom kill Wes on HTGAWM?

Over the course of this season, everything fans thought they knew about Wes' death has been put into question. At the end of Season 3, it seemed pretty clear that Dominic killed Wes, under orders from Laurel's father, Jorge. However, this season brought in Laurel's mother, Sandrine, who turned out to be just as shady as her ex.

It all began with a voicemail that Wes left on Dominic's phone before he died, saying that he was in "trouble," which seemed to indicate Dominic knew Wes before he went ahead and killed him. Then it was revealed that it wasn't Jorge who'd been calling Dominic's phone nonstop, it was Sandrine, which means Jorge's henchman was also close to her as well. Interesting. To make matters wore, Bonnie found security footage of Sandrine meeting with Wes before he died. Then when Frank checked Sandrine's phone records, it appeared she'd been calling Jorge nonstop day in and day out during and after the trial, which led Frank to believe Laurel's parents were working together.

However, this was easily explained away when Sandrine admitted to Laurel she'd been calling Jorge repeatedly so that Laurel could meet her son alone. Frank, tired of the games, finally just confronted Sandrine and asked her straight up if she'd met Wes before. She then confessed that she had and gave him $100,000 to stay away from Laurel. Except when Bonnie checked Wes' bank accounts, that money was nowhere to be found, and Bonnie urged Frank to just tell Laurel what he knows.

Frank, still unconvinced, checked through Wes' apartment for the money, but instead he uncovered a USB. On it was audio, supposedly from that meeting Wes had with Sandrine, on which Sandrine claimed Wes was having legal troubles, especially with the murder of Wallace Mahoney. On the recording, Wes said he was going to tell Laurel, which we all know he never had the chance to do.

So did Laurel's mom have Dominic kill Wes because he didn't cooperate with her or take the money she was offering and leave Laurel alone? If that's the truth, why did he call Dominic that night, of all people? Did Wes not know who Dominic worked for? It's really hard to say, especially when the show loves a good twist. At this point, Sandrine definitely seems guilty though.

She obviously didn't want Wes to be with her daughter, and if Laurel's father is really the true murderer then this whole season will feel like a total waste of time since viewers already knew that. Thus, it makes much more sense that Laurel's mother is the killer, though when is anything ever the simple answer on HTGAWM? There's most likely a twist in our future.

Thankfully, fans won't have to wait too much longer to (finally!) learn the truth about who killed Wes. The next episode promises to make everything clear about what happened to Wes on the day he died and fill in those gaping holes. The episode is titled, "The Day Before He Died," which seems to indicate we'll be taking a trip down memory lane and see how everything leading up to Wes' death really played out. So this is an episode you definitely won't want to miss.