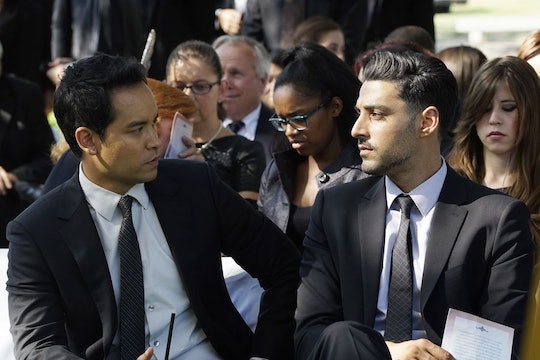 ABC's sleekly polished replacement for Scandal (which returns midseason) is the Piper Perabo and Daniel Sujata-helmed Notorious, which has slowly been building some mysteries for us to solve. At the center of the first season seems to be the question of who murdered Sarah Keaton, wife of tech start-up billionaire Oscar Keaton, and former flame of Sunjata's dreamboat defense attorney character, Jake Gregorian. While Oscar, as the alcoholic, abusive husband, is obviously the main suspect, his childhood best friend and company CFO Levi is curiously entwined in the story. So did Levi kill Sarah Keaton on Notorious? He's definitely hiding something.

Levi has been the culprit behind some of the show's shadiest goings on. First, he turns out to be the person who sent Julia incriminating photos of Sarah's bruising, Oscar in the throes of an affair, and Sarah and Jake in bed together. The envelope of photos appeared in Julia's mail anonymously, but with the help of her eager intern Ryan, she figures out it was Levi who sent them. When she calls him out on sending the photos and tries use the intel to pressure him into appearing on the show, Levi claps back, threatening to release the photo of Julia's good friend Jake and Sarah together to a competing network. Julia drops the matter, but that's not all Levi is up to.

Later, we learn that he's been catfishing Oscar, who was under the impression that he was having a cyber-affair with a sex worker named SweetVicky. Ryan and Ella, a low-level attorney at Jake's firm, track SweetVicky down and figure out that she has no idea who Oscar is. She suggests that he's been catfished, and, later, when Ryan and Ella are casually hacking Levi's computer for more information, they find photos of her and a chat history. So Levi has been posing as a woman to carry on an online relationship with his best friend, and he released incriminating photos of Oscar to a cable news network. We don't necessarily have hard proof connecting Levi to Sarah's murder, but he clearly has some ulterior motives.

It's unclear whether his beef is against Oscar and he's intent on ruining his best friend's life (a business dealing gone sour, perhaps?), or if he had some actual rage against Sarah that he finally acted on. But either way, he's pretty obviously intent on painting Oscar in the worst possible light, while maintaining outward appearances of supportive best-friendship.