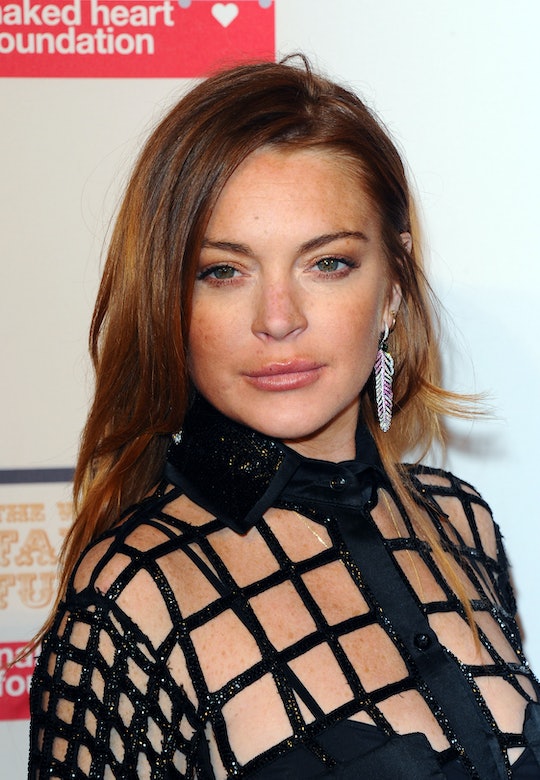 After updating her Instagram bio with the words "Alaikum salam" – a friendly Arabic greeting that means "Peace be unto you" – and deleting all of her posts and photos from her account, lots of people are wondering if Lindsay Lohan converted to Islam. The actress’ latest behavior certainly has a lot of people confused, not only because of her sudden change in social media activity. But, because, just a few months ago, Lohan reportedly picked up a bizarre new accent, was recently photographed in Turkey wearing a headscarf, and also extended support Turkish President Recep Tayyip Erdoğan's political party and praised his handling of the coup attempt last summer.

Last year, she was also photographed carrying a copy of the Quran, the Islamic religious text. Needless to say, lots of people are scratching their heads. Romper reached out to Lohan’s representative for comment on these reports and is awaiting a response.

While Lohan and her team has yet to respond to these reports publicly, a rep for Lohan did confirm to Gossip Cop that "she has not converted [to Islam]" and her mother, Dina Lohan, told the site that her daughter is "simply taking a break from social media."

Even so, many of her fans and Muslims from all over the world have congratulated the actress on social media for her alleged religious conversion. But, lots of people were wondering why the 30-year-old Parent Trap star wiped her Instagram clean of all her photos, as it's added to the speculation. As one Twitter user explained, this this social media "cleanse" might be because “all the sins are wiped out and forgiven after reverting to Islam."

If the reports that Lohan allegedly converted to Islam prove to be true or change course, her interest in the religion actually wouldn't be all that surprising. After Lohan was pictured with a copy of the Quran back in 2015 and wearing a headscarf in Turkey, she reportedly faced heated backlash in the United States

"They crucified me for it in America," she said during an appearance on Turkish TV show Haber Turk. "They made me seem like Satan. I was a bad person for holding that Quran."

She continued in the same interview, "I was so happy to leave [America] and go back to London after that because I felt so unsafe in my own country. If this [Islam] is something that I want to learn, this is my own will."

In the same interview with Haber Turk, Lohan also addressed the criticism she faced for wearing a headscarf, which she said was presented with her while she was working with Syrian refugees in Turkey. She said:

When the woman put that headscarf on me, I felt really honored because she went out of her own way to allow me to be a part of my own culture and she didn't have to do that. I said I really liked the color of her headscarf and she gave it to me, and maybe she had two and she gave me one – there's more in the story that occurred. Because this woman took the time to give me this, and a part of herself, not even knowing me, I'm not taking it off.

This isn't the first time Lohan has expressed interest in branching out to other religions as she was brought up Catholic and was photographed wearing a red string Kabbalah bracelet back in 2010.

Regardless of what the ultimate verdict of these reports proves to be, whether or not to be religious and which religion you choose is a personal choice. And even as a celebrity in the public eye, Lohan is still entitled to this freedom — even if it has thrown everyone for a loop.