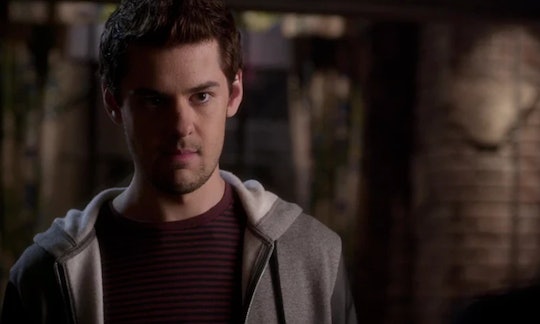 As promised, the final episodes of Pretty Little Liars have already begun to answer fan questions, however they've also provided viewers with some new ones as well. For example, last Tuesday's episode may have some of you out there wondering if there's a chance that Lucas killed Charlotte on Pretty Little Liars. During the episode there were a few major revelations that hint this could very well be the case.

First, Mary Drake was finally found hiding out with Pastor Ted. It turns out the two hooked up back in the day and Pastor Ted was actually revealed to be Charlotte's father. (Surprise! For once the answer wasn't Peter Hastings.) Things got even more interesting when Pastor Ted showed Hanna a picture of him and Charlotte at a sleep away camp, when Charlotte was much younger. Hanna asked who the other boy was in the photo and it turned out it was Charlotte's only friend "Luke." Yes, as in Lucas Gottesman.

Turns out Hanna's business partner was actually Charlotte's best friend. So why has he been keeping that a secret for so long? Naturally, it may be easy to jump to the conclusion that Lucas killed Charlotte, because everyone on this show is guilty until proven innocent. However, if Lucas and Charlotte were really friends way back when, why would he kill her?

It doesn't really seem to add up, however that's probably because fans don't have the full story yet. There's still so many other things to consider. Was Lucas aware of everything Charlotte has done? Did Lucas even know Charlotte had any relation to the DiLaurentis family? If Pastor Ted didn't know, one has to imagine that was kept a secret while Charlotte was at the camp, especially because Jessica DiLaurentis was so intent on keeping Charlotte's existence a secret. Now that Hanna knows this truth, will it be a surprise for Lucas or is it possible he really did already know?

Truthfully, the only way it would seem plausible that Lucas knew the truth was if Charlotte herself told him. This could actually explain another possible theory in which Charlotte's not actually dead but instead faked her death. If that's the case, it seems way more likely that Charlotte went to her good old friend Lucas, who no one even knew she was connected to, and asked for his help.

Maybe Lucas helped Charlotte fake her death and escape Rosewood and live a happy life, free from all her past mistakes. It's definitely a nice thought and would be a twist fit for PLL. But is it true? Fans will just have to wait and see.