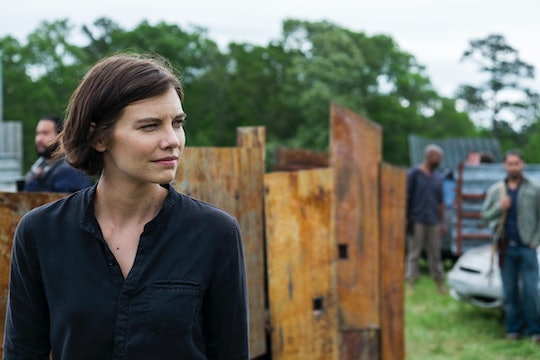 When The Walking Dead caught up with Maggie in "Dead or Alive Or," she was presiding over Hilltop from the office that used to belong to Gregory. But she wasn't alone. There was a baby keeping her company, which caused a little confusion among viewers. Did Maggie have her baby on The Walking Dead?

It may feel like Maggie has been pregnant for approximately four thousand years, but she hasn't had her baby just yet. There's no way fans would have missed her giving birth, since it's sure to be a major event on the show. The baby she was keeping an eye on was just a visitor to Hilltop. It's been a while since fans have seen Gracie, but she was taken from a Savior outpost after Rick disposed of her family earlier in Season 8. Aaron brought the baby to Hilltop, and it seems like Maggie is keeping an eye on her for the moment. Aaron's busy with Enid in Oceanside, so he can't take on babysitting duties right now.

The timeline of The Walking Dead can feel confusing sometimes because it moves much slower than it feels to fans. Years have passed in real life, but the past few seasons have only covered a few weeks in-universe. Maggie is so newly pregnant that she isn't even showing, so she couldn't possibly have had the baby yet.

Maggie announced her pregnancy late in the sixth season, so for audiences it feels like over two years have passed with no progress. But time moves differently in the zombie apocalypse. The Season 7 premiere picked up right where the Season 6 finale left off, and Entertainment Weekly reported that the seventh season spanned only nineteen days. Season 8 continued without much of a gap, meaning it has still been less than a month since Maggie revealed she was pregnant and Glenn died.

That explains why she doesn't have so much as a tiny bump, and it doesn't look like fans should expect one anytime soon either. Showrunner Scott M. Gimple told EW that Maggie won't be giving birth in Season 8, probably because she still has a long way to go before she's anywhere near her due date.

I always want to put a little ticker tape along the bottom of the episode saying how far into the apocalypse and into the pregnancy we are. Because I'm playing newly pregnant for a really long time. But the truth of the matter is, it's only been a matter of weeks since Negan killed Glenn.

At this rate, Maggie likely won't give birth until sometime in Season 9. Before that day arrives, fans can enjoy the visual of her handling her leadership duties with a different baby by her side. Unless something horrible happens before Season 8 ends, seeing Maggie with Grace is almost like a glimpse into the future. In the comics, she continues to run Hilltop while raising her son, so the image of her in the office with a baby could become a familiar one.

It's unclear how deep Maggie's bond with Grace goes, too. It's possible Hilltop's youngest resident might end up the adopted older sister of Maggie's baby if Maggie decides to raise her. Grace is currently safe in her new home but her situation isn't totally figured out. Her family is gone, but no specific character has stepped up yet to take their place. Perhaps Aaron will take responsibility for her if he ever makes it home, but it's just as likely someone else will become her adoptive parent.

Grace will just have to continue hanging out with Maggie until then.