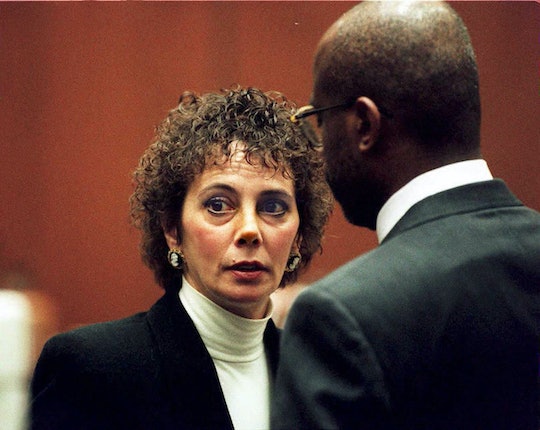 FX's American Crime Story lets us relive the O.J. Simpson trial, including the media circus that accompanied it. Unfortunately, the isms played a role in the trial and its media coverage — one of them being the sexism towards prosecutor Marcia Clark over her hair. Clark was a successful lawyer at the time, but the way she was treated was completely disheartening. Clark's appearance was bashed, especially her permed hair, which she changed midway through the trial.

Tuesday's episode of American Crime Story showed the origin of Clark's perm and the subsequent media backlash. Clark went to the hair salon for a new look; she was excited about her new hairdo — until she walked into court. The room was silent, and Judge Ito sardonically welcomed her. Clark had to hide her tears despite Chris Darden writing that he "loved it."

At the time of the actual trial, Clark wore her hair in a tight perm and wore what some may call "dowdy" suits, which was pretty typical for working women in the '90s. In a recent interview in The Cut, Clark said she did not like her hair. "It was wash-and-wear hair! It was easy. I had two boys in diapers and I didn’t want to be bothered. That’s why I had the perm," she commented. This makes sense, since not only was Clark a working mother, she was a working as a lawyer for "the trial of the century." Why should a woman who is fighting the case of her career have to worry about her hair or any other aspect of her appearance? The men on the case didn't face that type of scrutiny.

Partway through the trial, however, Clark's perm grew out. She went back to her stylist and debuted a new, straight bob on April 11, 1995. This was apparently news enough to warrant an article in the Los Angeles Times. According to the article, the courtroom break out in applause when she entered the room. Clark's hairstylist Allen Edwards was not only interviewed by the LA Times, but was contacted by over thirty other media outlets about the hairdo.

Not only was Clark mocked for her perm before, she was mocked for this "makeover." She told The Cut, "I mean, my perm grew out. That’s why I cut the hair. I didn’t have time to get it permed again, and, by the way, my hairdresser wouldn’t do it anyway. He hated it."

Sarah Paulson, who portrays Clark on American Crime Story, told IMDB that she received an apology from the real Clark about her hair at the time of the trial. "I mean her hair is horrible... She knew it was horrible," Paulson said. "The first time I met he, she said, 'I want to apologize for the hair.'" Paulson also commented that Clark's focus was trying to win the case for the prosecution, not worry about how her hair looked. As it should be. Clark did not enter the spotlight with any intention of being criticized for appearance, and it's sad to see that's what it turned into.