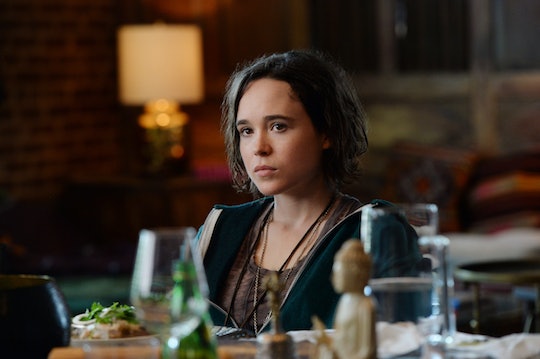 Did Margo Believe Tallulah In 'Tallulah'? Ignorance Might Be Bliss In The New Netflix Film

In the latest Netflix original movie, Tallulah, Ellen Page plays Tallulah, a young woman who lives out of her van and kidnaps a baby when she believes the mother is unfit. Tallulah then runs to Margo (Allison Janney), the mother of Tallulah's boyfriend, Nico, and tells Margo that the baby is Nico's. Although seemingly hesitant, Margo takes in Tallulah and the baby, who Tallulah renames Madison, after Margo. Even though Margo later seems shocked when she finds out the truth about what Tallulah did, one has to wonder if Margo really believed Tallulah, if she just wanted to trust her, or if ignorance was bliss in a situation that could have been remedied with the introduction of Tallulah and Madison.

At the start of the film, Margo is going through a rough time. She's refusing to sign the divorce papers from her husband who cheated on her and then left her for another man. She's also still living in his faculty apartment even though he left years ago and she's technically not supposed to keep the apartment. On top of that she hasn't seen her son in years because he left with Tallulah and never came back, and to put the icing on her miserable cake, her turtle died. It hasn't been a great time for Margo who published a book about marriage and still does signings for it even though her marriage is now over.

Enter Tallulah with a baby that she claims is Margo's granddaughter. At first glance, this allows Margo to forgo her lonely life. Although Margo at first says Tallulah and the baby can only stay for one night, she decides to let them stay indefinitely because Tallulah's life is, quite frankly, a mess. At first, Margo is not at all pleased with Tallulah, but they soon become friends and build a bond with each other while taking care of Madison.

Of course, there's no way Margo could've known what Tallulah did exactly but Margo doesn't really question Tallulah at all. She accepts that Tallulah doesn't seem to know much about kids, even though Madison over the age of one. She also accepts that Nico would've just left Tallulah and his baby, even though, as we learn later from Nico's dad, that doesn't sound like him at all.

Margo didn't want to be alone anymore and having Tallulah and the baby in her life made her happy, which is why she didn't question it. She ignored all the signs that something was off with Tallulah and the whole situation because she wanted to believe Tallulah's story and didn't question Tallulah until she couldn't deny Tallulah's suspicious behavior anymore. Ignorance is bliss in this situation, as it seemed both Tallulah and Margo needed someone, and found each other in a rather odd situation.

This is made even more clear when Margo confesses that the path she wanted in her life most was to be a mom. Whether Margo really believed Tallulah doesn't really matter, because for at least a little Margo got to be a mom again and that's all she ever wanted.