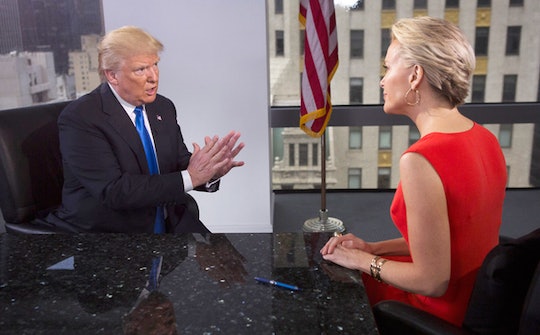 It was billed as an epic showdown. A primetime smackdown between the brash presidential candidate and the Fox journalist he’s attacked over the last year. What it ended up being was a bit of a let down. On Tuesday evening, Fox aired the first episode of Megyn Kelly Presents, featuring a much-hyped face-to-face with Donald Trump, who has targeted Kelly with insults since she hosted a Republican primary debate last year. With animosity surely lingering on both sides, viewers were looking forward to seeing Kelly verbally spar with the presumptive Republican nominee, but that never happened. The explosive interview between Kelly and Trump was lacking in, well, fireworks. It would seem, based on how oddly chummy they were, Megyn Kelly and Donald Trump have made up. The rivals have apparently called a truce.

The Fox News host and business mogul's relationship went sour after Kelly asked Trump about his misogynistic comments towards women while co-moderating an August 2015 GOP presidential debate. That moment triggered thousands of re-tweets and hate mail from Trump supporters aimed at Kelly. Trump publicly called her a bimbo, a lightweight, “Crazy Megyn," boring, and accused her of mood swings with a thinly veiled reference to her menstruation— “blood coming out of her wherever.”

But now, in an interview nine months in the making (as Fox touted it), Kelly and Trump were finally going to sit down and hash it out in a primetime interview. “Nothing is off limits,” Kelly promised in the opening moments of the show, her first foray into primetime network interviews like those of Barbara Walters or Diane Sawyer. Unfortunately, the only thing that seemed off limits by the end of the hour-long program was good, hard-hitting journalism.

Nixon-Frost it was not. It seemed as though the entire interview was meant to humanize the presidential nominee. The New York Times called the interview “convivial” and “easygoing.” Kelly asked Trump about his brother’s death, his father’s alcoholism, his multiple marriages and whether he’s ever been emotionally “wounded.” Asked if he has any regrets, Trump responded, “Absolutely [but] I don’t want to discuss [them].”

Kelly’s questions had obviously been planned beforehand—honestly, it was like Trump’s PR team had written them—and they were, well, bland. This is the woman who targeted Trump’s history of misogyny during a live debate, yet she was unable to address sexism during a one-on-one interview. Well, sexism beyond how it related to her.

“Let’s talk about us,” the Fox News anchor said. This was the moment people were waiting for when Kelly was going to hit Trump hard on his bully attitude. She asked Trump why he contested the question she posed at the Republican debate. “I thought it was unfair,” he complained. “My whole life is a debate, but I have never actually debated before.” It seems like Trump thinks that because he had never been in a public debate, his questions should be easier. Kelly refrained from pressing him further on the subject.

When Kelly presented Trump with tweets he’d written insulting the host, Trump feigned ignorance. “Did I say that?” he asked. “Many times,” Kelly responded. Trump offered an awkward half-apology, saying, “Excuse me.” Then seeking to minimize his own transgression, he bewilderingly added, “Over your life, Megyn, you’ve been called a lot worse.”

Kelly tried to generalize her experience, demurring, “It’s not about me. It’s about the messaging to young girls and other women.” But that tactic fell short of the audience’s desire to see Trump answer for his sexism when Kelly failed to ask any follow up questions.

It was disappointing for viewers and journalists to watch Kelly, paraded as a media darling after the August debate, capitulate offering up softball questions to the presumptive Republican nominee. Twitter users complained Kelly, who refused to apologize to Trump for “doing good journalism” in her Vanity Fair cover story, had lost her edge.

“Coming up soon in Kelly-Trump interview: ‘Do you like ice cream?; ‘Fave color?’; ‘Backstreet Boys or N Sync’” writer Pete Catapano joked. Hilariously, Catapano’s tweet came before the wince-inducing lightning round at the end of the broadcast when Kelly grilled Trump about his favorite movie: Citizen Kane (sure it is *eyeroll*); favorite book: All Quiet on the Western Front… but wait, he doesn’t actually read books. “I read passages,” the real estate mogul confessed. “I read areas. I read chapters. I don’t have time.”

Kelly may have attacked Trump before, but this softball interview suggests she is ready to toe her party’s line and get behind the GOP’s presidential nominee. Her line of questioning seemed to minimize Trump’s questionable ethics into simple personality quirks.

At one point Kelly confronted Trump on his bullying by catering to his ego. “You’re so powerful. You’re so powerful now,” the host said, while suggesting he use that power to be nicer to people. Trump promised to try but said of his campaign and Twitter antics: “If I were soft, if I were ‘presidential,’ if I would not have fought back the way I fought back, I don’t think I would’ve been successful.”

“I like our relationship right now,” Trump said to Kelly near the end of the interview (after his image had been softened and humanized by Kelly’s questions and flattery) before vaguely threatening that he could turn on her in the coming months. “This could happen again with us,” Trump warned.

There was nothing shocking about the interview, no revelations uncovered. It basically served as a way for Megyn Kelly to boost ratings during her break into solo interview programming and a way for Donald Trump to prove he could make nice with his enemies, as long as they don’t ask him “unfair” questions. Their ridiculously cordial interview further legitimized Trump’s campaign and launched Kelly’s new solo career. As Trump tweeted on Tuesday night, “and they all lived happily ever after!”

At least for now.