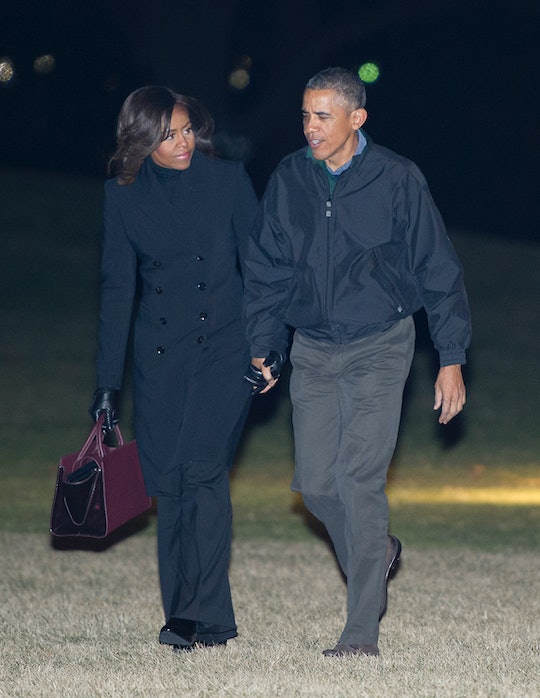 It's been suggested that, for just about every remark President Donald Trump makes, there is an equal and opposite tweet from Trump's own Twitter page to contradict it. And, unfortunately, that seems to be the case more often than not. After a global initiative proposed by Ivanka Trump received funds from Saudi Arabia recently, for example, social media resurrected a tweet from Trump in 2016 claiming that the Clinton Foundation's money from Saudi Arabia should be returned. And when photos emerged of first lady Melania Trump in Saudi Arabia sans headscarf, a tweet from Trump criticizing Michelle Obama for the same thing also made a reappearance. But, did Michelle Obama wear a headscarf while visiting Saudi Arabia or not? As it turns out, this particular archived Trump tweet actually happens to be true.

As Trump's tweet from 2015 points out, Obama did not wear a headscarf during her visit alongside husband Barack Obama in 2015. But that wasn't anything to worry about back then either — in fact, as The Washington Post notes, "Covering one’s head is not required for foreigners, and some Western women choose to forego the headscarf while in Saudi Arabia."

The issue now, though, is that Trump's tweet (once again) makes him look like a bit of a hypocrite, to say the least. Partaking in the exact same rituals that he criticized the Obama administration over isn't just out of touch, it proves the president has made a habit out of making a giant fuss over things that are relatively non-controversial — simply for his own gain.

First daughter and senior White House adviser Ivanka Trump also declined to wear a headscarf. Typically, tourists or western women in the Middle East decide not to wear one if they do not personally believe in the religious reasons behind it.

For reference, there are specific laws regarding women's dress in Saudi Arabia — specifically, as ExpatWoman.com states, "In public, the law of the land states that they should cover their everyday wear with a thick, opaque and loose fitting cloak that does not show off her body," in Saudi Arabia. However, high-ranking women have been forgoing the strict dress code for several years now.

All told, Trump's tweet about Michelle Obama's decision not to don a headscarf still matters. His insistence that everything the Obama administration and the then-first family did was wrong shows just how deeply divided this nation is. And with the kinds of comments Trump is still making, it doesn't seem like it will be getting better anytime soon.