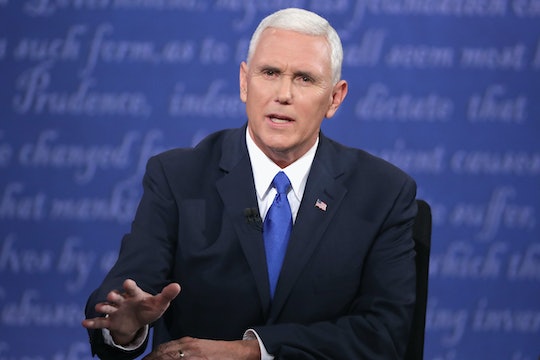 Did Mike Pence Support Conversion Therapy? He Wanted To Defund HIV Programs For It

It's probably not shocking to most people to hear that Indiana Gov. Mike Pence is no friend to the gay community. After all, it was Pence that signed Indiana's Religious Freedom Restoration Act into law, effectively legalizing discrimination on the basis of sexual orientation and gender identity. But some might not realize just how deep his biases go. During his 2000 congressional run, Pence called for federal funding for conversion therapy, and if you can believe it, the story gets even more despicable.

Pence's plan, according to his archived campaign website, was to divert funds from the Ryan White Care Act, a program meant to provide medical care and support services for people with HIV. Pence was apparently concerned that federal money was being spent on "organizations that celebrate and encourage the types of behaviors that facilitate the spreading of the HIV virus." It's not hard to infer what "types of behaviors" Pence is alluding to. Pence is on the record as being flippant with regards to HIV; after his legislation caused the only Planned Parenthood in Indiana's rural Scott County to shut down, an HIV epidemic erupted. His response: "If Planned Parenthood wants to be involved in providing counseling services and HIV testing, they ought not be in the business of providing abortions," according to NPR. (The Scott County Planned Parenthood never provided abortions.)

It is illegal in five states, as well as the District of Columbia, for licensed mental health providers to offer "conversion therapy" to minors, and according to the Human Rights Campaign, "more than 20 states have introduced similar legislation." And that's not just because it doesn't work; it's been proven to be damaging. Studies have consistently shown that family rejection of LGBT youth puts them at a much higher risk for substance abuse, depression, and suicide. If it helps to put a face to these facts, look to the 2014 death of transgender teen Leelah Alcorn, whose family's rejection (and failed conversion therapy) led to her suicide.

There are some voters who don't like the idea of a Donald Trump presidency, but cling to the hope that Pence, as his vice president, would actually be running the show. While Pence is certainly more experienced as a politician, he is no consolation prize. He is a man who seeks to punish gay people for their very existence. His positions on gay rights — human rights — are far more dangerous than Trump's, and his record needs to be made clear for all to see.