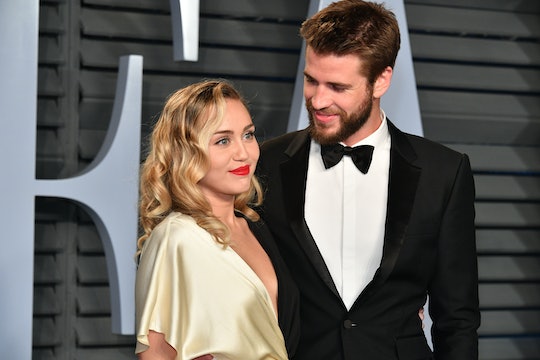 Those who have followed Miley Cyrus and Liam Hemsworth's relationship through the years probably remember the famous couple initially met on the set of The Last Song. (You know, everyone's second-favorite Nicholas Sparks movie, just behind The Notebook.) Personally, I've been convinced they were meant to be since I first saw sparks flying during this movie. But alas, life isn't the movies — and the actors have broken up and gotten back together many times since then. Until now, that is. So did Miley Cyrus and Liam Hemsworth get married? Photos of a private celebration have fans speculating.

Romper has reached out to Hemsworth's representative for comment, but did not hear back by the time of publication. As Marie Claire reported, it appears as if the lovebirds could have tied the knot on Sunday, Dec. 23 during an intimate affair with friends and family. Where's the proof, you ask? The couple's close friend, Conrad Carr, posted a video and a couple of photos of what certainly appears to be an at-home wedding celebration of sorts. So let's take a look at all of the evidence, shall we?

A video shared on Instagram Stories by Carr shows Hemsworth — along with his two brothers, Chris and Luke — doing a "shotski," according to People. And if you look closely, a "Mr. & Mrs." balloon is floating behind them. Ahhh! Could it be?

Of course, it is the holiday season after all. So this whole "secret wedding" business could very well be a holiday celebration of sorts. You know, with Hemsworth conveniently wearing a tux and Cyrus rocking a totally-not-a-wedding-gown white dress, and the couple both holding the same knife to cut a two-tiered cake. Hmmm.

Although I suppose this scenario is possible, that's not what the general consensus seems to be. In fact, fans are pretty convinced by the photo evidence, according to USA Today. One Twitter user wrote, "I can’t believe Miley Cyrus and Liam Hemsworth finally got married. I wish them nothing but happiness and love. They’ll always be my favorite couple."

Another Twitter user wrote, "The fact that Miley Cyrus and Liam Hemsworth are married has made Christmas better." (Same.)

Yet another person chimed in with, "CMON @MileyCyrus @LiamHemsworth CONFIRM THIS OMG I DONT WANNA GET MY HOPES UP BUT UGH OMG I AM SO HAPPY RN."

One person shared a GIF of a sniffling Wendy Williams, writing, "Trying to keep my composure and emotions in check knowing Miley Cyrus and Liam Hemsworth are married."

So yeah. If you need to find me, I'll be re-watching The Last Song and weeping openly into a pillow.

Because guys, it really looks like after all these years — through all the breakups, hard times, and makeups — Miley Cyrus and Liam Hemsworth are finally married. And I literally can't even.