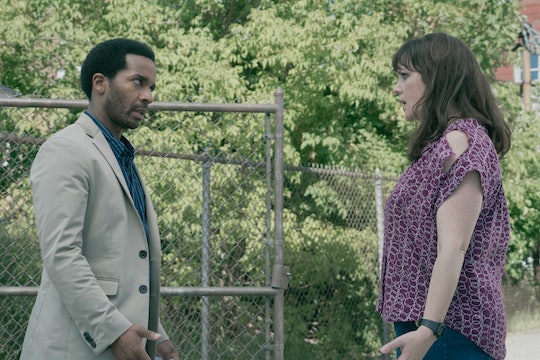 Molly Has A Dark Past on 'Castle Rock'

Hulu’s Castle Rock is set in a world inspired by Stephen King, and its characters are just as mysterious as those of his novels. For instance, the town’s high-strung real estate agent, Molly Strand (Melanie Lynskey), hears voices and claims to feel psychic connections. And in the third episode, some of her dark past is revealed. Did Molly kill Henry’s dad on Castle Rock? It sure looks like it.

Warning: Spoilers for Episode 3 of Castle Rock ahead

Episode 3, “Local Color,” dives into the shared childhood of Molly and Henry Deaver (André Holland), who were neighbors growing up. Molly, who needs Percocet to quiet the voices in her head, is sought out by Henry, and the confrontation sends her into a series of flashbacks. In one such vision, a preteen Molly walks over to the Deaver house and finds herself standing over Henry's dad, Reverend Deaver (Adam Rothenberg), who is on a ventilator in his home after being found in the woods with a broken back and in critical condition. Young Molly disconnects his breathing tube, and watches him perish for reasons still unknown.

Her connection with Henry appears to be the key to figuring out what exactly happened. In the present, Molly is arrested after unsuccessfully trying to score pills at a super creepy way-station for forgotten kids. When Henry bails her out, she tells him about her *special* connection to him, and how she hears his voice stronger than anyone else’s. “Things happen when we’re together,” she tells him. “And it can be overwhelming, and sometimes I can lose track of myself. And I cannot afford to do that again.”

When Henry rushes her to the set of her big TV interview, she can hear how troubled he is about the mysterious man (Bill Skarsgård) who was discovered locked away in Shawshank prison, and who Henry is trying to defend. Rather than talking about her real estate project, she discloses the Shawshank scandal live on the air, confirming that her psychic connection to Henry is very real.

I don’t know exactly why she killed Rev. Deaver, but I think it may have to do with the way he treated Henry. If he was hurting Henry in any way, Molly may have been feeling his pain too. The last time she saw Henry before he went missing was when he was driving away with his father in the middle of the night, so it’s possible that his dad had a hand in his disappearance. And the way Molly casually walked over to his home to kill him showed that she was completely sure of what she was doing, and she had no remorse on her face at time. But now Molly is being haunted by visions and dreams of Rev. Deaver, which shows the guilt and pain she’s suffering because of his death.

In a world inspired by King, everyone carries a complicated past, and no character is ever completely good or evil. Despite killing Rev. Deaver, Molly doesn’t seem like an evil person. And Rev. Deaver may not have been as righteous as people thought he was. Henry claims he doesn’t remember what happened that night, but it’s possible that he’s not as innocent as he seems either. There could always be a possibility that Henry was in control of Molly at the time she disconnected his father’s ventilator. She did know exactly where the house key was, she put on Henry’s hoodie, and knew exactly where his dad’s room was.

In a town like Castle Rock, where all things Stephen King reign supreme, anything is possible. Hopefully, as the season progresses, more mysteries will unravel. I can’t wait to find out how and why Henry disappeared, what his father had to do with it, and what part Molly and the mystery man will play going forward.